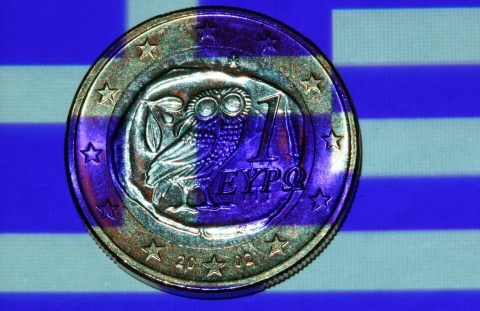 An illustration showing a Greek flag projected onto a Greek one euro coin in Schwerin, Schwerin, Germany, 24 July 2012. EPA/BGNES

Citigroup has forecast a 90% that indebted Greece will be leaving the euro zone in two months.

Citi has long been among the most bearish banks on Greece's prospects of staying in the euro, and now they're getting even more specific and dire in their forecasts, Business Insider reports.

"We continue to expect that the EMU crisis will persist, with prolonged economic weakness - especially in periphery countries - and further periods of intense financial market stress. Euro area GDP fell in Q2 and we expect that overall euro GDP will fall in both this year and 2013, with severe falls in most periphery countries", writes Citigroup analyst Michael Saunders in a new note.

"The Citi Economic Surprise Index (CESI) for the US recently has moved close to neutral, but for the euro area it remains firmly negative. We continue to put the probability that Greece will exit the euro area (ie "Grexit") in the next 12-18 months at about 90% and, within that timeframe, we think it is increasingly likely that Grexit will occur in the next 6 months or so, conceivably even as early as September/October depending on the outcome of the September Troika report on Greece," he adds.

In his words, the exact mechanics of Grexit also are uncertain.

"We envisage an extended bank holiday and some form of capital controls and limits on deposit withdrawals in Greece (and perhaps some temporary restrictions in some other EMU countries as well). Prior examples highlight that currency redenomination need not be uniform: for example, when Argentina abandoned its currency peg to the USD in 2002, the government decided to apply a 1-to-1 exchange rate for Bank loans and a 1.4-to-1 exchange rate to deposits", explains the analyst.

"Moreover, when East Germany adopted the Deutsche Mark as legal tender on July 1, 1990, just ahead of German unification in October of the same year, the East German mark was converted at par for wages, prices, pensions and savings up to a limit of 4000 East Mark/person. Financial claims, including corporate and housing loans, and savings in excess of 4000 East Mark were converted at a ratio of 2:1 into the Deutsche Mark. We assume that a new Greek currency would fall by about 60%, pushing inflation markedly higher in 2013- 16, but the scale of currency decline is highly uncertain", Saunders states.