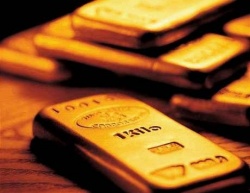 Bulgaria ranks 47th in a global ranking by gold reserves by August 2012.

Bulgaria has 39.9 tons of gold which account for 11.7% of the country's total reserves, according to recent data of the World Gold Council.

The United States has the largest gold reserves in the world, with 8133 tons of gold which make up 75.1% of its total reserves.

Germany ranks second with 3395 tons and the International Monetary Fund (IMF) is third with 2914 tons.

The Netherlands comes at the bottom of the top ten with 612 tons of gold reserves which account for 60.2% of its total reserves.

Out of the ten countries holding the largest gold reserves, Japan has the smallest share of gold as compared to its total reserves, at 3.1%.