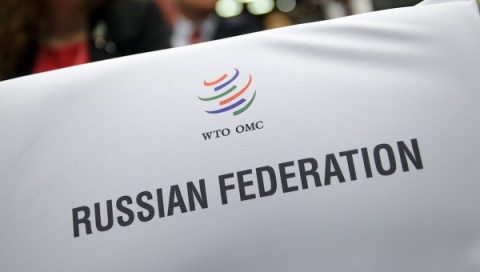 Russia has become the 156th member of the WTO. Photo by RIA Novosti

Russia officially joined the World Trade Organization on Wednesday as the protocol on its accession to the Marrakesh Agreement, the foundation document for the world trade club, entered into force.

The document, which was signed in Geneva on December 16, 2011, after 18 years of negotiations, makes Russia the global trade body's 156th member, RIA Novosti said.

The Economic Development Ministry said WTO membership will lower prices for both imported and domestically-produced goods. The World Bank calculates Russia's membership will boost GDP by 3.3% annually for the first three years, with that figure likely to increase later.

Critics have claimed Russia's WTO accession is detrimental to the country's national sovereignty and security and could ruin entire sectors of the domestic economy such as agriculture and the motor industry.

London business circles welcomed Russia's accession to the world trade club and said the move would help create an International Financial Center in Moscow and liberalize Russia's trade with other countries.

"As part of its accession, Russia has initiated a number of measures designed to open up its economy, including tariff reductions on a range of industrial goods and measures to liberalise the Russian services sector, including phased liberalization of the Russian financial and professional services sectors."

WTO rules will not apply to Russia's trade relations with the United States, however, until the Jackson-Vanik amendment is repealed.

The amendment, named after Congressmen Henry M. Jackson and Charles Vanik, was introduced in 1974 to restrict trade with the Soviet Union and other non-market economies until they allowed free emigration.

The restrictions imposed by Jackson-Vanik are often waived, but remain in place and are a thorn in the side of Russia-US trade relations.