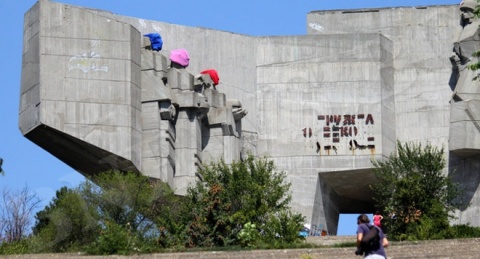 Supporters of Russian punk band Pussy Riot have decorated the Bulgarian-Soviet Friendship memorial in the Black Sea city of Varna with colorful hoods. Photo by bnews

Supporters of Russian punk band Pussy Riot have decorated the Bulgarian-Soviet Friendship memorial in the Black Sea city of Varna with colorful hoods.

The makeover is believed to be a protest against the controversial two-year sentences received by three Pussy Riot members last Friday. The memorial, one of the tallest in the Balkan country, was probably painted overnight, local media say.

Nadezhda Tolokonnikova, 22, Maria Alyokhina, 24, and Yekaterina Samutsevich, 30, were found guilty of what the court claimed was "hooliganism motivated by religious hatred."

The trio performed an anti-Kremlin "punk prayer" in the Cathedral of Christ the Savior in late February.

Last Friday, the soldiers of the monument of the Soviet Army in downtown Bulgaria capital Sofia also "woke up" to wearing colorful hoods in sign of support of the three girls from Pussy Riot. That was the latest in a series of Sofia Soviet Army monument makeovers.

The most famous "decoration" of the Soviet Army monument so far happened in June 2011when a group of street artists painted the bronze figures of Soviet soldiers to represent various US pop culture characters, turning them into The Joker, Wolverine, Santa, Superman, Ronald McDonald, Captain America, Robin, and Wonder Woman, among others.