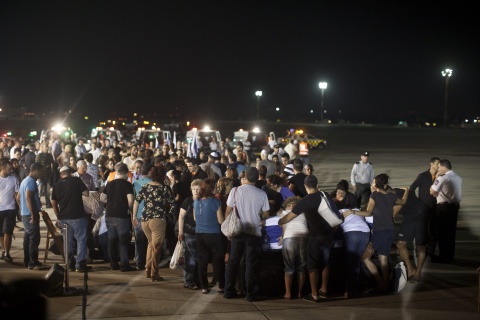 Relatives mourn five Israelis who were killed during an explosion on a tour bus in Burgas, Bulgaria, after their arrival at the Ben Gurion airport outside Tel Aviv, early 20 July 2012. EPA/BGNES

Bulgaria can find the perpetrator of the July 18 Burgas terrorist attack only if it relies on its own resources, argues former CIA agent Robert Baer.

Baer, who worked for the CIA 1976-97 concentrating on the Middle East, stated that Bulgaria should not rely too much on the US or Israel in the case in an interview for Bulgarian bTV Sunday.

"You cannot receive an objective answer from them. Both the USA and Israel want to lead a war Iran," said the former agent.

"But if Washington has a reliable proof against Iran, they might not want to share with Israel, if the States are not yet willing to hit Iran," added he.

According to Baer, those are regular intelligence games and are very different from a true police investigation, which should be conducted by Bulgaria's own security forces.

On the other hand Baer, who now writes for some of the world's most respeced English-language magazines, said he is certain that Hezbollah has long been operating in Bulgaria and other East European countries.

The July 18 attack was directed against Israeli tourists in Bulgaria, and claimed the lives of five of them, their Bulgarian bus driver, as well as the presumed suicide bomber.

Top Israeli statesmen immediately reacted to the attack by throwing the blame on Hezbollah and Iran.

"Hezbollah has been operating in Bulgaria since the mid 1980s. They had a network and I have personally participated in investigating a group of theirs on your territory in the 1990s," said Baer.

He added that both the Bulgarian government and CIA at the time were worried about the penetration of Hezbollah in Bulgaria, but said that natrually he cannot give any further details about the network.