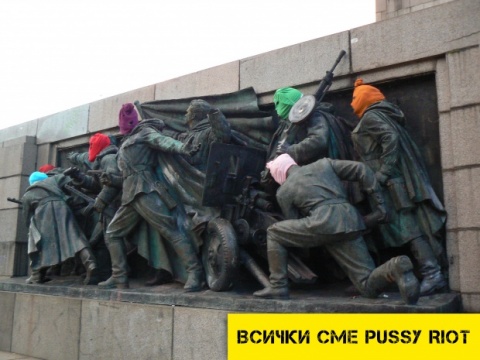 The bronze figures of Soviet soldiers from the Soviet Army monument in Sofia wore colorful hoods Friday morning in support of the Russian band "Pussy Riot." Photo by BNT

The colorful hoods of the soldiers of the monument of the Soviet Army in downtown Sofia have been painted in sign of support for the female Russian punk group Pussy Riot, who are facing trial over "anti-Putin" acts.

The soldiers of the monument of the Soviet Army in downtown Bulgaria capital Sofia "woke up" Friday morning to wearing colorful hoods in sign of support of the three girls from Pussy Riot, who staged a prayer against Russian President, Vladimir Putin, in a Moscow cathedral.

The message of the latest in a series of Soviet Army monument paintings emerged early Friday morning when it was sent to the media by people who signed it as "A Group of Humans."

Friday is also the day when the girls from Pussy Riot expect to hear their verdict.

The message is addressed to the Russian Embassy in Sofia, the Bulgarian government, the Parliament and the media, with the idea to focus attention on the innocence of the young women and the unfair trial, which violates freedom of speech.

"Pussy Riot are an inspirational symbol of the fight for democracy in Russia. The entire international community, including Bulgarian authorities, must support them in their fight to stop the regime from attempting to shut their mouths. With this act of protest we want to demonstrate that Bulgaria is joining the brave members of the group in their quest. We are all Pussy Riot," the message reads.

The picture, sent to the media from "A Group of Humans," bears the inscription "We Are All Pussy Riot," while the hoods are the same as those worn by demonstrators in Moscow, protesting in support of the band.