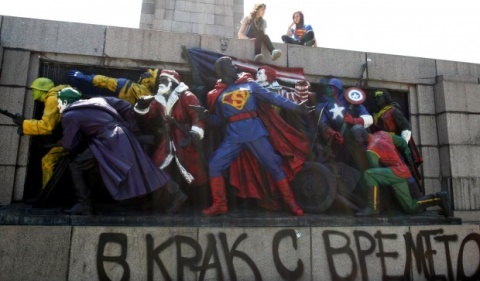 In June 2011, Sofia's Soviet Army monument was painted by unknown street artists to represent a set of US pop culture characters. Photo by BGNES

The soldiers of the monument of the Soviet Army in downtown Bulgaria capital Sofia "woke up" Friday morning to wearing colorful hoods, in what is their latest painting.

The authors of the street art remain unknown.

In the last few years the Monument has been subject of heated arguments between those who want it to be dismantled and those who support its existence in the very heart of Sofia.