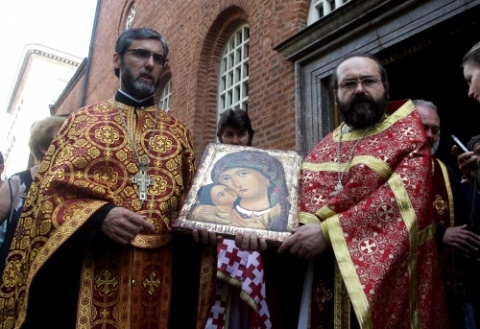 Bulgarians join August 15 the Christian world - Orthodox and Catholic - in celebrating one of the major religious holidays, the Assumption of Virgin Mary. Photo by Sofia Photo Agency

Wednesday is Dormition of the Holy Mother of God, one of the greatest Christian Eastern Orthodox holidays, which brings together many believers.

Known to Catholics and Anglicans as Assumption of Mary, the holiday marks the day the mother of Christ passed away and was accepted in Heaven.

It is a holiday of happiness and joy, for it was the day that the mother of Christ rejoined him in eternal glory.

For Eastern Orthodox and Roman Catholics alike, Mary's Assumption is seen as a concrete and present instance of the resurrection of the body, a belief integral to Christian theology and found in the creeds.

In Bulgaria the day is also the name day of persons bearing the widespread name Maria, and cognates like Mario, Mariana.

Many people will flock to churches for the traditional Dormition of the Holy Mother of God services.

The famous Troyan Monastery, which bears the name of the day, has its temple holiday Wednesday, and a lot of people are expected this year, as usual. Bulgarian Patriarch Maxim will be present at the mass to bless the believers, despite his advanced age and reports of ailing health.

The mass will be served by the Bishop of US, Canada and Australia, Joseph. He is in Bulgaria with a large group of Christian Orthodox Americans and is taking them on a tour to historical and religious sites.

The Bishop of Lovech, Gavrail, will serve the mass at the Lovech church "Dormition of Mary" in the presence of Deputy Prime Minister and Interior Minister, Tsvetan Tsvetanov.

Crowds are also expected for the service at Rila Monastery south of Sofia in the Rila Mountain.

The day is also the official holiday of the Black Sea capital Varna, whose main cathedral bears the name of the Dormition. The city will be visited by Prime Minister, Boyko Borisov, Regional Minister, Lilyana Pavlova, and Transport Minister, Ivaylo Moskovski.

The day is also the name day of Maria, Mariana, and their derivatives.