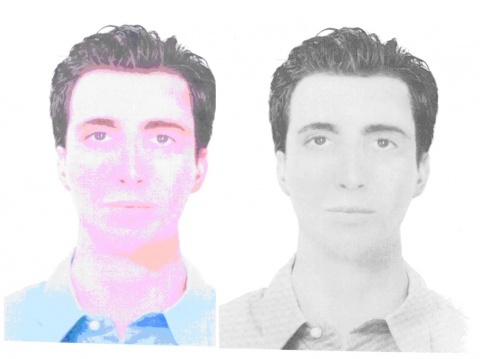 INTERPOL has published the computer-generated image created by the Bulgarian police of the bomber in the Burgas Airport terrorist attack. Photo by Interior Ministry

The new details and leads in the terror act in Bulgaria's Burgas will be provided to the media and the public no earlier than Thursday, August 16.

The decision has been made during a meeting of the team leading the investigation, the Bulgarian National Radio, BNR, informs, despite earlier promises that media should anticipate some new information Tuesday.

On Monday, Interior Minister, Tsvetan Tsvetanov, reported that the Interior Ministry had new details, but could not release them to the public because the new data was operational.

"We had some discussions today with representatives of our foreign partner services and we concluded that we can release some information to the media on Tuesday," Tsvetanov, cited by the Focus news agency, told journalists one day ago.

When asked if the investigation has established the identity of the perpetrator, the Minister offered a firm "No," adding the authorities need additional help from Bulgarian citizens and hope the information that will be released through the media will reach them and they will contribute to the unraveling of the case.

The latest news comes among a number of reports and expert opinions that the Bulgarian investigation is clueless about the identity of the perpetrator, any possible accomplices, the mastermind of the attack, its motives, and has botched the probe, while the US CIA and the Israeli Mossad are keeping Bulgarian colleagues on the sidelines and are feeding them selected pieces of information.

The July 18 terrorist attack in Bulgaria's Burgas, also known as the Burgas Bus Bombing, killed 5 Israeli tourists and a Bulgarian bus driver at the Sarafovo Airport. The initial lead, purported by the Interior Minister was that it has been executed by a suicide bomber, who arrived from abroad.

According to observers and terror experts, this lead is looking less and less reliable and the most sustainable hypothesis is that the perpetrator has been used as a mule.

Israeli media largely back the above, writing that the young man with light complexion and blue eyes had been blown remotely, while standing between two coaches with Israeli tourists. He had been unaware that he was going to die and had the task to put the explosive on one of the buses. The bomb was placed in his backpack.

Remains of the man recovered from the scene of the fatal attack were used to create an image showing his possible appearance as part of an appeal for public assistance in identifying him.

At the request of Bulgarian police, INTERPOL issued a Black Notice – used to seek information about unidentified corpses – to each of its 190 member countries in all four official languages (Arabic, English, French and Spanish) and is now also publishing this reconstructed image to engage the public's help in identifying the man.

On Sunday, Georgi Iliev, investigator from the National Investigative Services, stated the probe had decisively proven the alleged perpetrator of the terrorist act was a suicide bomber, only to retract this claim on the very next day.

On Tuesday, Ilana Stein, deputy spokesperson at the Israeli Foreign Ministry, hinted of a certain Iranian or Lebanese involvement in the bus bombing. She confirmed Israel's official stance, with Israel Prime Minister Benjamin Netanyahu blaming Iran and pro-Iranian Lebanese militant group Hezbollah for the bus bombing right after the first reports came out.