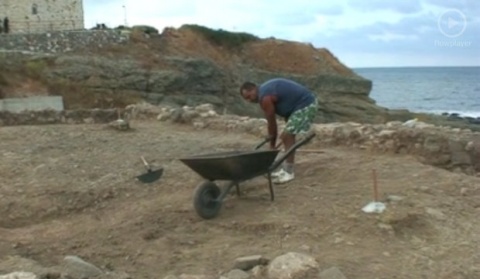 The first ever archaeology excavations in the southern Black Sea town of Tsarevo are already yielding precious finds. Photo by BGNES

Bulgarian archaeologists have discovered a Thracian settlement during the first ever excavations in the town of Tsarevo on the southern Black Sea coast.

The team is led by Milen Nikolov, an archaeologist from the Regional History Museum in the Black Sea city of Burgas.

The settlement is very close in location to the town church "Uspenie Bogorodichno." The find proves that Tsarevo and nearby areas have a history more ancient that what was believed until now.

During the excavations, the archaeologists have found remnants showing that as early as the 4th – 5th century BC Thracians have built a town that existed until the 1st century AC.

Nikolov explains the discovery is a 2 500-year history rewind, saying the finds further include a four-wick lamp, tomb gifts, and a number of vessels.