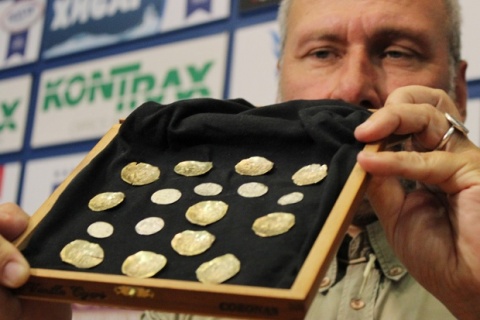 Bulgarian archaeologists expect to find at the holy rock city of Perperikon the largest ever medieval coin treasure in the country.

The announcement was made by leading Bulgarian archaeologist, Prof. Nikolay Ovcharov, after his team recently found a total 11 gold and 6 silver coins.

The coins have been found dispersed in what has been used as a toilet hole with a 2-meter diameter, leading the experts to believe that they were hidden and buried during the Ottoman invasion of the area. Such treasures were usually placed in clay pots or similar vessels and then concealed, while for the latest find it is believed that the coins were put in some sort of a purse, which has decomposed over the years.

The coins were found in the central town of Perperikon, near the Citadel, in the area believed to have been the residence of the very wealthy bishops.

Ovcharov says the excavations there are continuing with expectations to discover more than 50 other gold coins.

The latest finds also include an intricate silver frame of a still-undated icon.

There is ongoing research at the two churches in the southeast area of the Acropolis while two tombs, most likely bishop ones, will be opened next week.

Ovcharov informs that the site enjoys lasting strong interest from local and foreign visitors with an increased flow of those from neighboring Romania and Turkey.

The unique Ancient Thracian city of Perperikon was first discovered in 1979 in the Eastern Rhodoppe Mountains. It is thought that the famous sanctuary and oracular shrine dedicated to Dionysus of the Bessi tribe was situated there. The ancient rock city contains remains from all archaeological periods.

Ovcharov also discovered nearby an ancient Thracian surface tomb in the village of Tatul, containing a sanctuary linked with the cult of Orpheus.

Ovcharov is nicknamed the "Bulgarian Indiana Jones" in reference to the popular character played by actor Harrison Ford.