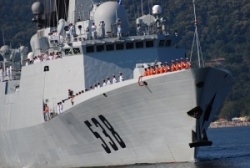 The Chinese frigate "Yantai" is the first Chinese naval vessel to ever visit a Bulgarian port. Photo by Cherno More daily

The missile frigate Yantai of the Navy of the Chinese People's Liberation Army (PLA) has wrapped up its first visit to Bulgaria.

The report cites Avgustina Tsvetkova, Bulgarian Deputy Defense Minister, who spoke highly of the visit of the Chinese warship at a reception held on the Yantai frigate.

Tsvetkova stated that the first visit of the Chinese warship to Bulgaria has "far-reaching significance in further consolidating and developing the relations between the two countries and their militaries."

The frigate, one of the warships in the 11th Chinese naval escort taskforce of the PLA Navy which had just completed the escort missions in the Gulf of Aden and the waters off Somali coast, arrived in the Port of Varna on August 5.

This is the first visit of the Chinese naval warship to Bulgaria not only since the establishment of diplomatic relations between Bulgaria and the PRC 63 years ago, but also in Bulgaria's 14-century history and in China's several thousand-year history.