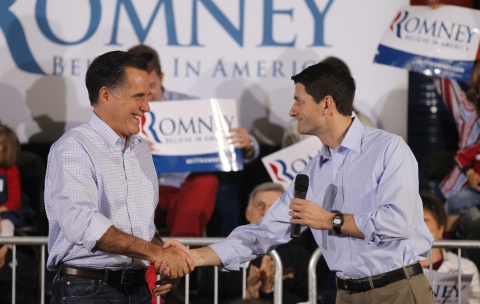 US Republican presidential nominee Mitt Romney has announce his running mate in the November election will be Paul Ryan.

Romney unveiled his vice-presidential running mate at a campaign event in Norfolk, Virginia.

The Romney-Ryan tandem first appeared together Saturday at an event on a former battleship, USS Wisconsin, which is docked in Norfolk.

Paul Ryan himself is a US Member of Congress from Wisconsin, and is serving on the House's Ways and Means committee.

He has worked on a number of deep reform proposals for the US tax system, which are according to critics designed to benefit the wealthy.

"In January 2010, Ryan gained attention nationwide after unveiling his" Roadmap for America’s Future," a proposal to eliminate the federal deficit, reform the tax code, and preserve entitlements for future generations," reads the official GOP release.

After Saturday, the US Republican Party presidential candidate will set off on a four-state bus campaign trip.

Recent opinion polls suggest the former Massachusetts governor is locked in a close race with US President Barack Obama for the November 6 vote.