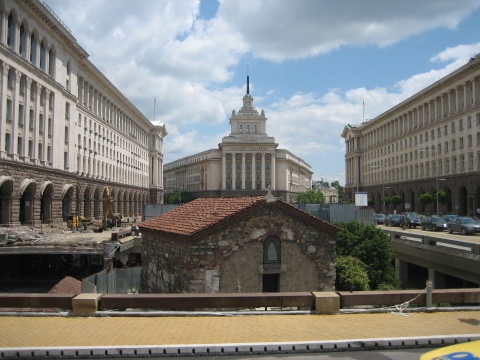 The beautiful Sofia Largo was a construction site for years over subway digs. File photo

The "Independence" square in the very heart of Bulgaria's capital Sofia will be open for pedestrians by the end of August, according to Culture Minister, Vezhdi Rashidov.

The first stage of the "Serdika" complex, the so-called Largo, enclosed between the buildings of the Council of Ministers, of the Presidential Office, the Offices of the Parliament and the "Sveta Petka Samardzhiyska" church will be completed on August 30.

The opening of the Largo coincides with the launch of the second line of the Sofia subway with the Serdika metro station beneath the square becoming the junction.

The long-standing metal barriers which surrounded the construction site will be finally removed and pedestrians will be able to observe the work of archeologists through glass panels.

The excavations are currently in their third stage, focusing on research of remains of the antique town. The entire complex is expected to be finished by July 2013.