Bulgarian President Flying Back and Forth to London (Olympics) 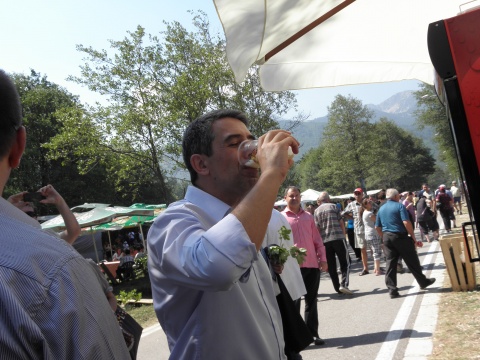 Bulgarian President Rosen Plevneliev has managed to open a couple of music festivals between Olympic trips to London. Photo by BGNES

Bulgarian President Rosen Plevneliev is flying back to the UK capital on Wednesday even though he already made a visit to London at the onset of the 2012 Olympics.

On August 9, Plevneliev will have a meeting with CEOs of financial institutions which is organized by the Lord Mayor of the City of London David Wooten, the Bulgarian Presidency announced Wednesday, adding that the meeting will focus on the economic situation in Europe, the future of the euro zone, and the potential tax on financial transactions in the EU.

Bulgaria's President will also visit the Tech City UK hi-tech cluster, and will have a meeting with UK Foreign Secretary William Hague.

The Bulgarian Head of State will watch the Track and Field and Rhythmic Gymnastics events and will be present for the performance of Bulgaria's female wrestler and biggest hope for gold, Stanka Zlateva, and of marathon swimmer, Petar Stoychev.

The President will also attend the official closing ceremony of the Games, and the reception hosted by UK PM David Cameron on August 12.