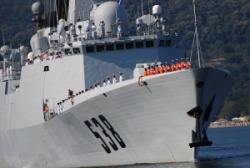 The Chinese frigate "Yantai" is the first Chinese naval vessel to ever visit a Bulgarian port. Photo by Cherno More daily

An Open Day for Bulgarians was held on Tuesday at the Chinese frigate "Yantai", which arrived at the Bulgarian Black Sea port of Varna to make a five-day goodwill visit.

The frigate "Yantai" of the 11th Chinese naval escort flotilla arrived at the Bulgarian Black Sea port of Varna on Sunday.

"We came here mainly because China is a friendly country for us, Chinese people are our brotherly nation, and we came to look at the ship, which came to visit in Varna for the first time," a visitor told Xinhua.

Another visitor, Ivan Lambov, a former master mariner, said that he very much enjoyed the frigate and the organization onboard.

"This ship is strong, and probably it has been tested in combat conditions," Lambov said.

He said he understood from media reports that "Yantai" has performed duties in anti-piracy areas. "To be in anti-piracy areas and on duty, you have to be in form because modern pirates are not what they once were: it is no joke to fight against pirates," Lambov said.

Meanwhile, Senior Captain Li Hua, "Yantai" frigate Commander, told reporters the ship was launched in 2010 and was commissioned in 2011.

He said this is the newest Chinese navy ship, equipped with the most advanced Chinese technology.