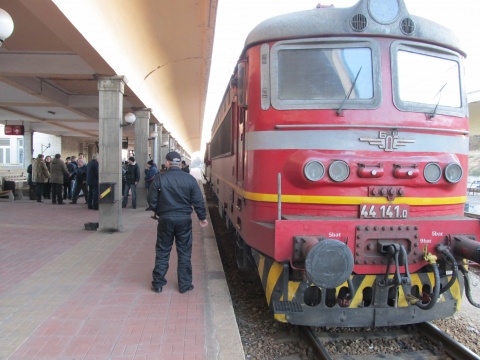 At the end of last week, Bulgarian Finance Minister Simeon Djankov gave the BDZ Holding management one weekend to come up with new reforms to save the company; this happened as BDZ was about to collapse financially as a result of Djankov's decision to withhold the BGN 14 M subsidy for the state railways in July even though BDZ is entitled to it by law.

The reason for Djankov's move was BDZ's failure to service two 1995 World Bank loans whose interest has had to be assumed by the Finance Ministry.

"The subsidy to BDZ Passenger Services will be fully restored. There will be no layoffs and no termination of train services," Bulgarian Transport Minister Moskovski told reporters after a meeting between the Finance Ministry, the Transport Ministry, and the BDZ management.

Moskovski elaborated on the package of measures and reforms that the three institutions agreed upon in order to patch up the situation at the Bulgarian State Railways whose total debts near BGN 1 B.

"We have agreed to implement as soon as possible all short term measures to reduce BDZ's expenditures in any way possible," he stated.

In his words, the first measure to be implemented will be a major legislation amendment to allow Transport Police and the BDZ conductors to fine free-riders.

"Keep in mind that the railways can make millions by cutting the gratis trips," Moskovski said.

The second measure that is supposed to help prop up the ailing Bulgarian State Railways has to do with introducing harsher punishments for theft of fuel or spare parts from the railway inventory – a rampant form of crime in Bulgaria.

"Third, we agreed with the Finance Ministry that BDZ will make non-cash contributions – buildings or perhaps holiday properties – that can be used to guarantee its payments to the creditor, the World Bank, on this old loan," Moskovski explained.

"Let's not forget that this loan dates back to the time of [the Socialist Cabinet of] Zhan Videnov, to those smart gentlemen who God knows how could afford to take any sort of loans. That was the total lack of responsibility back in 1995. So we are now honored to have to pay for that," the Transport Minister argued.

He said the government experts are going to work out in the next couple of days what BDZ assets can be used in order to guarantee the servicing of its old loan to the World Bank.

He also added that the Bulgarian railway company will have to do away very quickly with any untypical activities by selling its shares in any other companies.

"The state subsidy for July will be paid in full by the end of the year, the way it is stipulated by the law. We will work out the details in the next couple of days. There is no reason not to allocate the money," he said.

"The reforms in question are not anything new for us. We have been working on them for a while anyway. The matter now is that we hope to have results in the near future," stated in turn BDZ CEO Yordan Nedev.

Moskovski also revealed that he has been assured by the Bulgarian Privatization Agency that by the end of the year BDZ Freight Services – the one profitable department of the state-owned company – will be sold.

Last week, Bulgarian Prime Minsiter Boyko Borisov offered German company Siemens and German bank KfW to take over BDZ Freight Services in exchange for a debt that BDZ owes to them for the purchase of 50 Siemes Desiro trains.