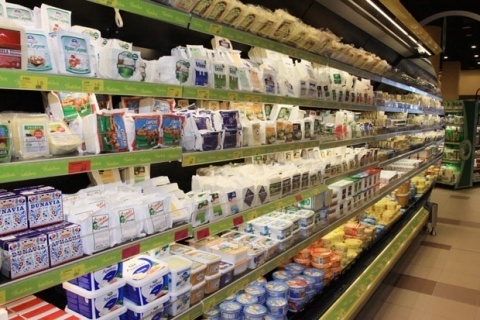 The 3-month price freeze of staple foods introduced by 3 retail chains in Bulgaria has met with serious opposition. Photo by Sofia Photo Agency

The Made in Bulgaria Union has come up with a declaration opposing the 3-month price freeze of staple foods, saying that the measure will harm local producers.

As a result, three retail chains, the Bulgarian branches of Metro Cash & Carry, Kaufland, and Billa, committed to a price freeze of 10 basic food products for three months.

The declaration of the Made in Bulgaria Union makes it the fourth entity to oppose the step after the Bulgarian Industrial Association (BIA), the right-wing Democrats for Strong Bulgaria (DSB) party and the left-wing Bulgaria Socialist Party (BSP).

The Union argues that the measure more or less refutes the country's market economy because state-imposed restrictions of competition harm Bulgarian producers and will only worsen the already seriously skewed relations between producers and traders in the country.

The Union notes that the retail chains will freeze prices of their own "white brands" which roughly make up the above-mentioned basket of ten products and are in any case much cheaper than the same products made by other companies.

The organization emphasizes that around 50% of final sale prices go to the retail chains' gross profits at present.

The Union adds that that the price freeze, which is supposed to benefit consumers, will lead to new bankruptcies of Bulgarian producers, to a new increase in unemployment and to a further contraction in consumption.

The Union calls on the government to stick to the principles of market economy and real protection of competition.

The organization recommends that the state should take steps to bring food production and trade entirely out of the grey sector by requesting a mandatory VAT registration of all operations in the sphere.

According to the Union's estimations, some 50% of the food operators in Bulgaria are not registered for VAT, which results in losses for the state budget and for loyal producers, traders and consumers.

The Union also calls for equal standards in the control over imported food products and items made in Bulgaria.

The organization highlights that there is no other way to increase incomes of Bulgarian citizens but to develop the production of goods and services in the country.

The Union argues that the government cannot handle unemployment without improving the conditions for production and trade in the country, mostly through curbing monopoly power and strictly enforcing the rules of free and fair competition and equality.