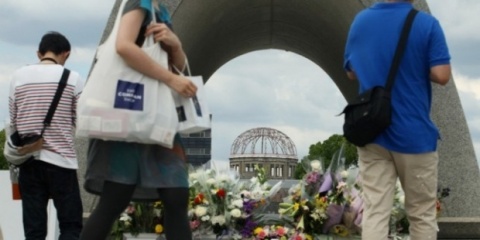 The peace memorial ceremony for the 67th anniversary of the world's first atomic bombing was held in Hiroshima Monday. Photo by EPA/BGNES

The world marks Monday the 67th anniversary of the first use of nuclear weapons in war, the August 6, 1945 American bombing of the Japanese city of Hiroshima.

In Japan, tens of thousands of people gathered in Hiroshima to mark the moment the bomb was dropped, killing 140 000 people instantly or within months of the bombing in 1945, in the final days of World War II. Japan surrendered after a second atomic bomb was dropped on Nagasaki three days later, on August 9.

A bell marked the start of a one-minute silence at 08:15 am local time when the US bomber Enola Gay dropped the bomb.

Speaking at the ceremony, Prime Minister Yoshihiko Noda said the lessons of Hiroshima must not be forgotten.

"We will establish an energy mix with which people can feel safe in the long- and medium-term, based on our policy that we will not rely on nuclear power," he said.

BBC reports that the ceremony was also attended by a grandson of former US President Harry Truman, who ordered the bombing of Hiroshima and then Nagasaki.

Clifton Truman Daniel is the first of the family to attend the annual ceremony.

He said while it was hard to hear the survivors' stories it was important for his family to understand the full consequence of decisions made by his grandfather, the BBC's correspondent in Japan reports.

In 2010, Washington decided to send US Ambassador John Roos to the event, which was the first ever attendance of a representative of the United States, whose military aircraft delivered the bomb attack.