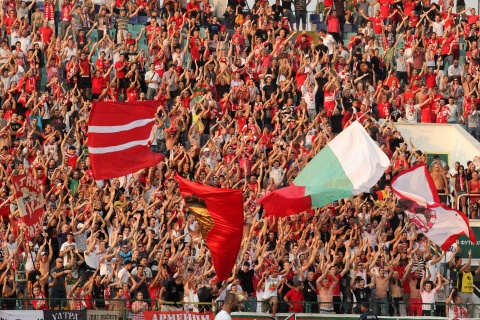 CSKA Sofia fans at a recent Europa League draw against Slovenian Mura, which threw the Bulgarians out of the tournament. Photo by BGNES

"I told Gazprom CEO Alexei Miller that if in October we agree on the South Stream pipeline, it would be good if the top Bulgarian football club got a sponsor in Gazprom," said Borisov in an interview for Darik Radio.

The Bulgarian PM was discussing a state of perceived poor management of the club by Bulgarian company Titan.

Borisov said Miller expressed an interest in the offer, but specified that Gazprom has the tradition to sponsor teams playing in blue colors, such as are the colors of the gas colossus.

Levski Sofia, CSKA's arch-rivals, play in Blue, but PM Borisov specified that they do not need a sponsor at the present.

"So they agreed to sponsor Bulgaria's historically most awarded team, CSKA, who play in red," said he.

According to the Bulgarian PM, CSKA Sofia will start to get financed by Gazprom once the joint-company for the natural gas is created.