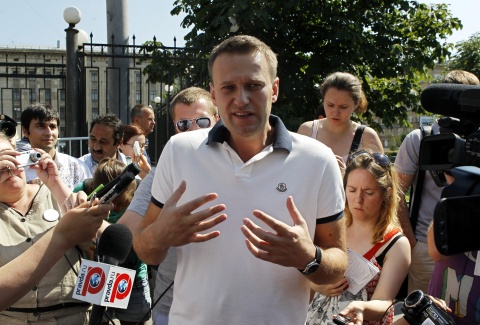 Court bailiffs have barred Russian opposition figurehead Alexei Navalny from entering the Khamovniki Court in Moscow in order to testify as a witness in the Pussy Riot punk band trial.

Three Pussy Riot members - Nadezhda Tolokonnikova, Maria Alyokhina, and Yekaterina Samutsevich, all aged between 20 and 30 - are on trial in Moscow over their performance of a "punk prayer," calling for then-Prime Minister Putin to quit. The performance included insults directed at Russian Orthodox Church Patriarch Kirill, as well as blasphemous words that insulted believers.

The young women face up to seven years if convicted on hooliganism charges in the case that has split Russian society, with some calling for harsh punishment and others saying the women only committed an ethical wrongdoing which should not punished with prison terms.

The three women have been in jail since their arrest a few weeks after the performance took place on February 21. They say their song was to oppose what they called church support for Putin's presidential election campaign.

Yekaterina Samutsevich, Nadezhda Tolokonnikova and Maria Alyokhina were detained in early and mid-March. All the three women admit being part of the Pussy Riot collective, but deny taking part in the cathedral performance. Both Alyokhina and Tolokonnikova have small children.