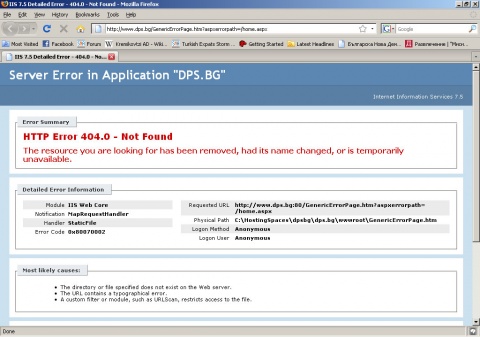 A screenshot of the hacked Movement for Rights and Freedoms website.

The Bulgarian unit of the Anonymous has hacked the website of liberal Movement for Rights and Freedoms party Thursday evening.

As of 8 pm EET, the party's website, www.dps.bg, is not to be accessed, and will continue to be so until 10 pm, according to the Anonymous announcement.

An "HTTP Error 404.0 - Not Found" message appears on the Movement's website instead.

This is the second of a series of Anonymous Bulgaria political hacking attacks, after Wednesday evening the site of the Bulgarian Parliament was cut down.

In the attack against the website of the Movement, which pretends to defend the interests of Bulgaria's sizeable Turkish minority, the Anonymous have protested against what they say are "dirty deals" and "rich lives" of party chair Ahmed Dogan and his associates.

In their statement on Facebook, the Anonymous have also called attention to what they see as blatantly poor and unjust conditions of living in Bulgaria.

In their attack against the Parliament website Wednesday evening, Anonymous Bulgaria again protested poor conditions of life, as well as what they called a curtailing of civil rights.