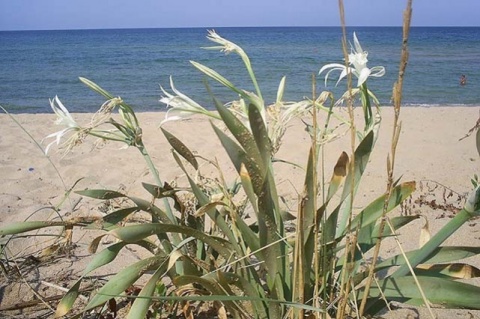 Sand dunes in the Arkutino reserve in Southeastern Bulgaria; many of the sand dune areas along Bulgaria's Black Sea coast have been destroyed by resort construction. Photo by bulgariaiside.com

The NGOs demand that the Bulgarian authorities terminate the legal procedure for changing the status of the sand dunes that allows resort construction on them, explained Emil Georgiev, a representative of the Ecoglasnost Political Club at Thursday's news conference of the Civic Environmental Public Council, a NGO, over the issue of destroying and expropriating of Black Sea coastal areas.

Many of the territories with natural sand dunes on the Bulgarian Black Sea coast, especially in the south, were destroyed by resort construction in the construction boom after 2002-2003.

"The [July 18] terrorist attack in Burgas has diverted public attention from the additional discussion of the Black Sea Coast Act before its second reading at the Bulgarian Parliament. This has allowed some mayors and MPs to talk nonsense so that they can reject the most important part of the law, namely, the complete ban on monolith construction in the 100-meter zone along the coast ("Zone A"). We have tabled our position to the Parliamentary Committee on Regional Development, and we are waiting for an invitation to present our position before the MPs," Georgiev explained, as cited by BGNES.

In his words, the ban on construction in "Zone A" will preserve the nature, and will guarantee a steady inflow of tourists in the future.

"This will put an end to the reckless construction, and the behavior of some oligarchs who behave like feudal lords along the Black Sea coast," he argued.

"We are extremely worried by the attempts of certain mayors, such as the Mayor of Sozopol Panayot Reyzi, and MPs from the Burgas region such as Ivan Valkov, Dimitar Boychev, and their guru in the Parliament, MP Iskra Fidosova, to block the government's efforts to put Black Sea coast construction in order. In our view, these people are the major actors wishing to perpetuate the concrete construction of the Black Sea coast. Is this about the business interests of oligarchs such as Prokopiev, Kovachki, Stoykov, Pashov, who are destroying Bulgarian nature with impunity?" the environmentalist argued.

Georgiev reminded that sand dunes are supposed to be a protected natural site, and pointed out the Oasis complex in the Black Sea resort of Sunny Beach East as an example of a resort complex that was built illegally on a sand dune site.

"It is madness but in Bulgaria sand dunes are legally comparable to agricultural land, and pastures. Please agree with me that there are no pasture on sand," he argued, adding that the Civic Environmental Public Council will table letters to the Bulgarian ministries of economy, regional development, and environment, and will insist on these institutions' written assurance that the status of the sand dune territories on the Black Sea coast will not be changed in order to allow construction.

"Unless we get the requested meetings and the respective ministries provide written positions, please consider it done that there will be civil disobedience and a blockade on the Burgas-Varna road near Sunny Beach," Georgiev said.