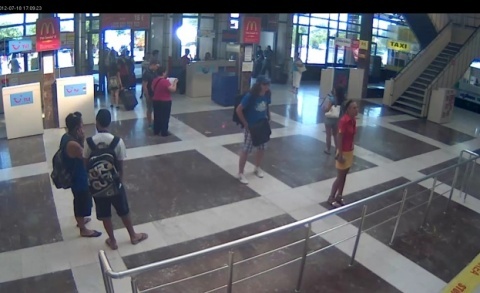 According to this picture, released by Bulgarian investigation, the man in the middle has been said to be the suicide bomber behind the July 18 terror attack at the Burgas Airport.

The alleged perpetrator of the July 18 terror bombing at Bulgaria's Burgas airport has been spotted earlier at the airport of the capital Sofia, according to eyewitnesses.

A married couple has approached the Bulgarian Klassa daily, saying they are ready to fully collaborate with police, insisting they saw the man at Sofia airport on July 10 between 10:40 am and 11:20 am.

According to them, the individual they noticed looked a lot like one of their friends and this is why he attracted their attention.

The man had long hair, kept his bag clutched to his chest, had a backpack and was dressed in shorts, similarly to the alleged Burgas bomber. He has been walking aimlessly and nervously through the doors without going to the counters.

After seeing the pictures from Burgas, the family checked flights and learned that at the time they spotted the suspect, there were departing and landing flights to and from Tel Aviv in Sofia.

The couple, who were sending off an acquaintance to London, says they were under stress after realizing a similar attack could have happened at the Bulgarian capital's airport.

Meanwhile, the Burgas Prosecutor informed that the Israeli survivors of the attack will be questioned once again as witnesses. The need to repeat the testimony is attributed to the fact that in the night after the attack the investigators took handwritten notes, and some are illegible.

Hotel owners at the Sunny Beach resort are distributing Xerox copies with the computer-generated image of the alleged perpetrator to their guests as a counter-terror measure.

Police continue to search for traces of the terrorist in Sunny Beach and the nearby resort towns of Ravda and Nessebar, where he has been also spotted before the attack.

Despite promises of Interior Minister, Tsvetan Tsvetanov, made last Saturday that it was a matter of hours for the Interior to release to all media official photos of the assailant, police now say they continue to process the pictures in order to make them more precise.

The July 18 terrorist attack in Bulgaria's Burgas, also known as the Burgas Bus Bombing, killed 5 Israeli tourists and a Bulgarian bus driver at the Sarafovo Airport. The initial lead, purported by Tsvetanov, was that it has been executed by a suicide bomber, who arrived from abroad.

According to observers and terror experts, this lead is looking less and less reliable and the most viable hypothesis is that the perpetrator has been deluded, used as a mule, and has acted under the influence of illegal drugs.