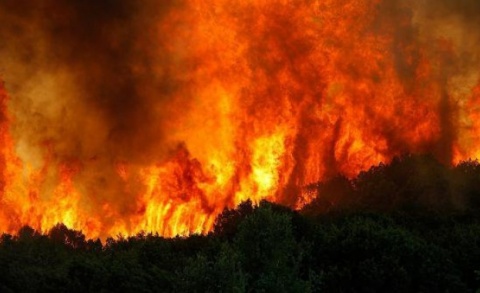 Firefighters, forest rangers and soldiers are battling the latest wildfire in southern Bulgaria. Photo by BGNES

The wildfire that started Monday afternoon near the village of Bryagovo in the southern Bulgarian region of Haskovo has already engulfed 2 000 decares.

The flames are getting dangerously close to the nearby village of Rhodoppe Tuesday morning and are just one kilometer away from the first houses.

The village Mayor, Margarita Atanasova, confirmed for the Bulgarian National Radio, BNR, reports that the villagers are waiting for the fire to reach Rhodoppe, and are gathered at the exit armed with shovels and ready to help. Atanasova further reassured that all measures have been undertaken and there are enough fire trucks.

Locals have not yet been evacuated as of Tuesday morning.

Fire rescue teams have worked overnight in an effort to tame the blaze, which is also dangerously close to the military training ground of Koren.

The call about the fire was placed at 3 pm Monday. Its cause remains unknown. 7 fire trucks with 45 firemen, 15 forest rangers, and 15 army servicemen are taking part in the extinguishing effort.