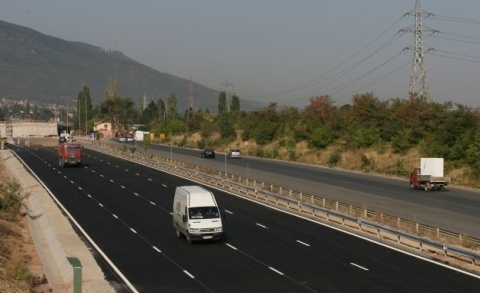 The Trakiya highway in southern Bulgaria is expected to be completed by the spring in 2013. File photo

The deadline to finish Lot 4 of Trakiya Highway in southern Bulgaria is scheduled to be open no later than February 2013, thus the highway will be fully completed by then.

The news was reported Monday in the town of Parvomay by Regional Minister, Lilyana Pavlova.

The earlier deadline for Lot 4 between the town of Karnobat and Burgas (47.4-km long) was the spring of 2013.

Pavlova voiced renewed hope that next summer the entire drive from the capital Sofia to the beach will be on the highway, shortening travel times significantly.

The Minister further commented that 70 km of new sections are now open and everyone travelling to the city of Yambol can see the difference in speed and safety.

Lot 3 of the southern Trakiya highway, connecting the town of Nova Zagora and the city of Yambol, was launched on July12.

The length of the new section is 35.7 km. The breaking ground was on August 2010. The contractor is the Greek company Aktor which offered the price of BGN 133 973.

With the launch of Lot 3, and the recently opened Lot 2 (between the city of Stara Zagora and Nova Zagora) the travel time by car from the capital Sofia to the Black Sea city of Burgas is now shorter by one hour.

Pavlova stated that the section of the highway from Yambol to the key junction Petolachkata (15-15 km) might be ready as early as August 2012.

"There is no fixed deadline for this section, but we count on the good will of the contractor," said she.

The project to build Lots 2, 3, and 4 of the highway is co-financed by the cohesion funds of the European Union through Transport Operational Program 2007 – 2013.

The Minister was in Parvomay to cut the ribbon of the finished project to renew the town environment, financed with BGN 4 M from the EU Regional Development Operational Program and co-financed by the State with BGN 400 000. 16 streets, and a number of playgrounds, and sports fields have been repaired and constructed under the project.