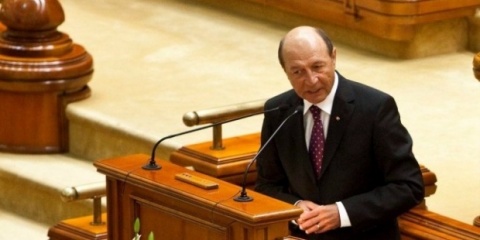 Romanian President Traian Basescu has survived his impeachment referendum thanks to the low turnout. Photo by EPA/BGNES

Romanian President Traian Basescu has survived Sunday's referendum on his impeachment thanks to the low voter turnout, according to the official statement of the Romanian electoral authorities.

A total of 45.92% of the eligible voters took part in Sunday's impeachment referendum, which is below the required turnout of 50% + 1 vote, the Romanian Central Electoral Bureau said before 1 am on Monday, as cited by local media.

As polls closed, preliminary figures indicated turnout was less than the 50% required to make the result invalid.

Basescu, who has been suspended by parliament, had asked his supporters to boycott the vote.The center-left government had accused the center-right president of exceeding his authority and of meddling in government affairs.

Three hours before the polls were due to close, the election bureau said turnout so far had been 37.7%, the BBC reported. Initial polls put the turnout at about 44%.

As voting ended, Basescu said that Romanians had "rejected a coup" by staying away from polling stations.

The row between Basescu and Prime Minister Victor Ponta has caused alarm among Romania's EU partners.

The row has paralysed political decision-making in Romania at a time when it is finalising agreements on an IMF-backed aid package. Basescu's popularity has slumped since he backed tough austerity measures demanded by Romania's international lenders.

Basescu had initially urged Romanians to vote "no" to what he called "a coup", but later asked his supporters to boycott the vote altogether, a stance also adopted by the opposition Liberal Democrats. According to the latest polls, about 65% of the electorate wants to remove Basescu.

Some 18 million Romanians were eligible to vote. However, analysts predicted the government would struggle to achieve the required turnout.

The referendum is the latest twist in an ongoing power struggle between Mr Basescu and Mr Ponta, who has been the driving force behind efforts to unseat the President.

Ponta, who is himself embroiled in a scandal over plagiarism, challenged Romania's Constitutional Court and has been accused of threatening judges whom are aligned to the President. The prime minister's actions have provoked harsh criticism from the EU.

European Council President Herman Van Rompuy voiced "deep concerns" about the political crisis in Romania "with regard to the rule of law and the independence of the judiciary".

Despite Romania's promises to respect EU institutions, Brussels has said it has yet to see any proof this is the case.

Romania and neighboring Bulgaria joined the EU in 2007, but Brussels has put both countries under special monitoring because of concerns about judicial independence, corruption and political influence in state institutions.