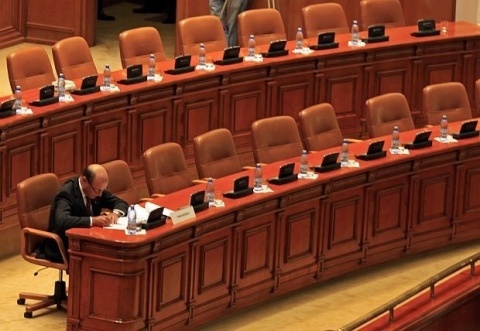 The President of Romania Traian Basescu sits in the Parliament before the vote on his removal. Photo by BGNES

Romanians are voting in a referendum on whether to impeach suspended center-right President Traian Basescu.

Basescu would be reinstated as President if the 50% turnout threshold is not reached.

Opinion polls show that a majority of Romanians are likely to vote to remove Basescu from office. The Presidents is unpopular in Romania over his support for austerity measures.

At the beginning of July, the two chambers of the Romanian Parliament voted at a joint meeting to suspend Basescu, for 30 days.

After heated and long debates, a total of 258 Members of the Parliament out of 432 voted in favor of the move against center-right Basescu. 217 were needed to pass the suspension.

Basescu was suspended on the grounds that he had overstepped his authority by interfering in government business and legal affairs. He firmly denies the accusations and blames opponents for destabilizing Romania.

The Speaker of the Senate, Crin Antonescu, a Ponta supporter, is acting President.

Basescu, who has been president since 2004, has recently clashed with his rival Prime Minister Victor Ponta. He accuses Ponta of trying to interfere with Romania's legal and state institutions. Ponta, who heads the Social Liberal Union (USL), is himself under pressure to resign over allegations of plagiarism.

BBC notes that the political conflict between the president and prime minister has stalled decision-making processes in Romania at a time when it is finalizing agreements on an IMF-backed aid package for its economy.

The vote came as the European Union expressed concern about rule of law in the country, drew much criticism from European Union officials and affected negatively the country's latest Co-operation and Verification Mechanism report.

Basescu survived an earlier attempt to impeach him in 2007 thanks precisely to the referendum, but his popularity among voters is strongly declining in the last 2 years.