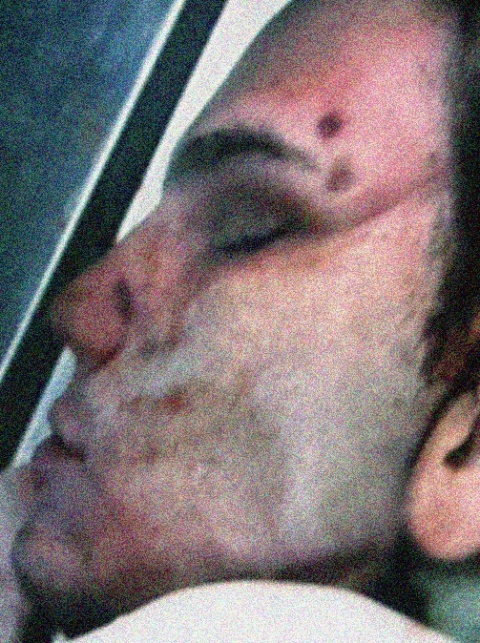 A photo of the distorted face of the alleged perpetrator, or a mule, in the July 18 terrorist attack in Bulgaria's Burgas. Photo from bivol.bg

Bulgarian investigative site Bivol.bg has published photos of the head of the alleged suicide bomber and perpetrator of the July 18 terrorist attack in Bulgaria's Burgas.

The July 18 terrorist attack in Bulgaria's Burgas, also known as the Burgas Bus Bombing, killed 5 Israeli tourists and a Bulgarian bus driver at the Sarafovo Airport near Burgas.

The photos released by Bivol.bg show the distorted face of a young blue-eyed Caucasian male with black hair. The photos have seemingly been computer modified, Bivol.bg notes without specifying the source of the photos.

The report states that the images of the alleged Burgas Bus Bombing perpetrator further questions the version presented to the Bulgarian and international public by Bulgarian Interior Minister Tsvetan Tsvetanov that the attack was committed by a suicide bomber as it appears increasingly more likely that the bomber was in fact used as a "mule" by the real organizers of the attack.

According to this version, the young man was blown up from a distance without being aware that he was smuggling explosives into a bus that was supposed to take Israeli tourists from the Burgas Airport in Sarafovo to the Sunny Beach resort.

Bivol.bg cites as further evidence for this version the testimonies of an Israeli tourists, Gilat Kulangiya, who says she saw how the bomber removed suitcases from the baggage compartment of the bus in order to place there his bag; this led to a scandal between the bomber and Kulangiya's husband and another tourist, which is when the explosion occurred. The report presumes that the actual organizers of the terrorist attack decided to detonate the explosives in the backpack upon seeing the row from a distance.

Bivol.bg reminds the statement of former Chief of Israel's Counter-Terrorism Bureau, Brigadier General Nitzan Nuriel, who snubbed the suicide bomber version of the Bulgarian investigators, saying that the perpetrator was not a suicide bomber because he would have detonated the bomb in a different way to inflict more casualties, and that his task was to place the explosives on the bus.

Bivol's report notes further than on Friday the Bulgarian government members and MPs continued to reiterate the suicide bomber version in order to justify the failure of the Bulgarian security and intelligence services to prevent the July 18 terrorist attack, and reminds the conflicting statements of the Bulgarian leadership, with PM Boyko Borisov saying at one point that the bomber might have entered Bulgaria from the Schengen Area, while Interior Minister Tsvetan Tsvetanov said there was no data that the bomber had been present on EU territory.

Bivol.bg has criticized the controversial Varna-based business group TIM, which together with German company Fraport owns the concessionaire of the Varna Airport and the Burgas Airport, Fraport Twin Star Airport Management, over the terrorist attack, reminding that TIM has a long-standing security business, and that the group's name has surfaced in US diplomatic cables that were published on WikiLeaks among the major organized crime groups in Bulgaria that has created a business empire.