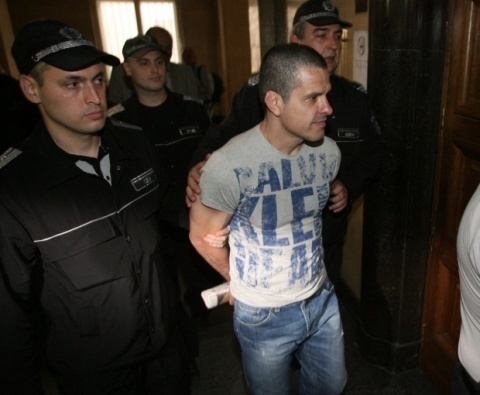 Alleged top Bulgarian criminal Evelin Banev AKA Brando has been extradited to Italy Thursday with a flight from Sofia to Rome.

Another individual, M.B., 36, was also sent with Banev, the Interior Ministry informs Friday.

On July 17 2012, the Sofia Appellate Court upheld the June 20th decision of the lower instance, the Sofia City Court, to extradite Brando to Italy for one year to face trial there as well. The rule was final and could not be appealed.

Brando is charged in Italy with illegal drug trafficking and has an Interpol arrest warrant. The Bulgarian magistrates grounded their decision on being officially approached and asked by Italian authorities to extradite the alleged criminal.

During the year, he will be brought back to Bulgaria to be tried by the same Sofia City Court on charges of large-scale money laundering, the Italians have assured.

One June 1, the Sofia Appellate Court upheld the lower instance rule to keep Brando permanently behind bars. The Prosecutor requested the measure on grounds Banev planned to secretly escape from Bulgaria to avoid the money laundering charges and trial.

His lawyers say that his defense rights have been violated thus there was need of examining the said document from the arrest and the raid.

In the aftermath of the arrest, Deputy Prime Minister and Interior Minister, Tsvetan Tsvetanov, informed that Banev had an Interpol arrest warrant in Switzerland on charges of trafficking 10 tons of cocaine from South America to Europe and of money laundering. The Prosecutor's Office, however, denied having any information about a recent crime committed by him.

At the June 20th Court session on Brando's extradition, the defense counsel argued that it would violate her client's defense rights because even if he is brought back, there would not be enough time to prepare for the Bulgarian trial. She further stated she could not understand why the Italian investigation is getting priority when the Bulgarian one is in a much more advanced stage.

The lawyer, one of the top criminal ones in Bulgaria, Ina Lulcheva, added one year was too long of a period since Brando needs only to appear to be indicted. She voiced suspicions that the numerous statements of Interior Minister, Tsvetan Tsvetanov, linking Banev with the trafficking of 10 tons of cocaine and money laundering in Switzerland and with the delivery of a total of 40 tons of the drug to Italy have influenced the outcome.

There is no evidence so far to back Tsvetanov's claims about the defendant being suspected of any crime in Switzerland.

Seven of those detained in the special police operation "Cocaine Kings" were extradited to Italy on July 12 and 13.