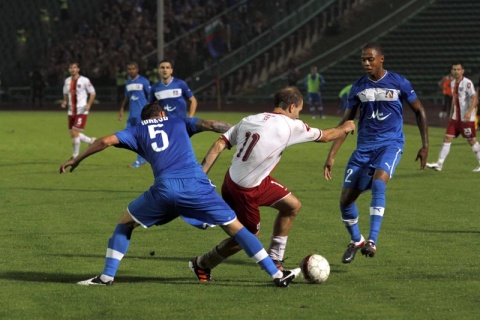 Sarajevo defeated Levski (in the blue shrts) by 3-1 on Thursday.

All Bulgarian football clubs playing in this year's UEFA Champions League and Europa League were eliminated by their very first opponents, a catastrophe unseen in 15 years.

Levski suffered a 3-1 defeated at the hands of FK Sarajevo in the Bosnian capital on Thursday, thus failing to qualify for Europa League's third qualifying round. The Bosnian underdogs are deservedly through, as they saw off the Bulgarian side 3-2 on aggregate.

CSKA is also out of the tournament, as its 1-1 draw with little known Slovenian side Mura was not enough. The first game finished 0:0.

Expectedly, Lokomotiv Plovdiv was eliminated by Dutch side Vitesse Arnhem, as it lost 3-1 away on Thursday in another Europa League game. Vitesse won by 7:5 on aggregate.

On Wednesday, Bulgarian champions Ludogorets Razgrad failed to upset Croatia's Dinamo Zagreb. The Croatians craped through with 4-3 on aggregate after Domagoj Vida's winner in the 98th minute.

The last time all Bulgarian teams lost in the very first round they played in was in 1997.