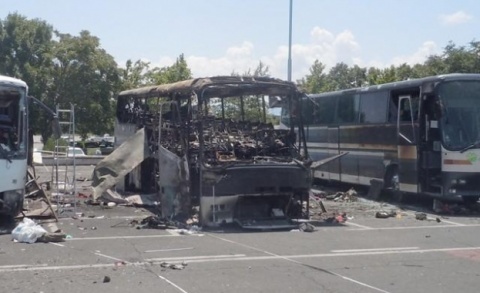 The explosion in Bulgaria was the deadliest attack on Israelis abroad since 2004. Photo by BGNES

Belgium is not currently investigating the terror act in Bulgaria's Black Sea city of Burgas.

The news was reported by Derniere Heure daily, citing the spokesperson of the Federal Prosecutor's Office, Lieve Pellens.

The article notes that Bulgarian media have reported that the alleged suicide bomber has arrived from Belgium and could be a Belgian national as one of the leads in the probe. Pellens says that Bulgarian authorities have not yet contacted their Belgian colleagues, but does not dismiss the possibility it could happen very soon.

The spokesperson notes the prosecutor's office had not been notified by the Bulgarian investigation that they are looking into a lead of the assailant being Belgian.

Meanwhile, the local Soir cites an undisclosed intelligence source close to the investigation that there is no evidence whatsoever to suspect a Belgian involvement. The source explains that Belgian intelligence, as well as those in other French-speaking countries, remains on high alert over information the man spoke English with a French accent.

The July 18 terrorist attack in Bulgaria's Burgas, also known as the Burgas Bus Bombing, killed 5 Israeli tourists and a Bulgarian bus driver at the Sarafovo Airport. The initial lead was that it has been executed by a suicide bomber, who arrived from abroad.

This lead, however, is looking less and less reliable. One of the reasons is that the bomb is different from those used by suicide bombers, who aim to cause the most damage possible. It was not made with nails and steal balls, which inflict large-scale destruction.

Results from blood testing from the suspect's leg for narcotics content are expected in order to verify the hypothesis that he has been deluded, used as a mule, and acted under the influence of illegal drugs.

Just one day earlier, the former Chief of Israel's Counter-Terrorism Bureau, Brigadier General Nitzan Nuriel, also stated that the perpetrator of the terrorist attack was not a suicide bomber.

Speaking in an exclusive interview for Darik radio, the General said the people who hired the suspect have lied to him and he had no idea that he was going to die.