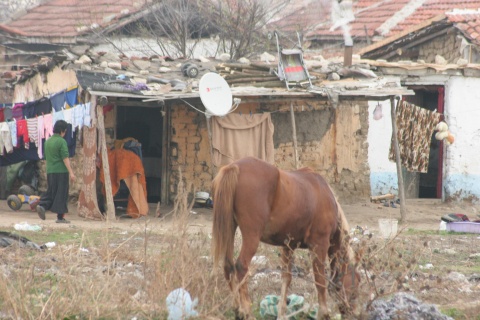 The Bulgarian Helsinki Committee (BHC) has warned Sofia Mayor Yordnka Fandakova to abstain from demolishing Roma ghettos at random because the move may breach the European Convention on Human Rights.

"Dwellings inhabited by Roma families are to be treated as their "homes", as provided for in the ECHR, when they have been living there for many years. Their illegal status according to the domestic legislation makes no difference. Forcing the people out of their homes would constitute encroachment on their personal and family life, if they remain homeless," BHC Chair Krasimir Kanev says in an open letter to Fandakova.

The letter comes in response to an interview of the Sofia Mayor published Thursday on Standard Daily's front page.

The BHC finds that the following statements of Fandakova are problematic: "The illegal dwellings must be demolished by all means and the people who came from different parts of the country must return because they either have nowhere to live here or they are inhabiting illegal housing" and "everybody is welcome in Sofia but they cannot live in illegal dwellings and on terrains they do not own."

Kanev reminds of the "Batalova Vodenitsa" case, when the European Court of Human Rights in Strasbourg ruled that Bulgaria had no right to force people out of ghettos if this would make them homeless.

The case Yordanova and Others v. Bulgaria involved the two attempts (in 2005-2006 and in 2008) of municipal authorities to evict Roma from a settlement situated on municipal land in an area of Sofia called Batalova Vodenitsa without offering the inhabitants alternative shelter.

After two children from the Sofia-based "Asen Zlatarov" Orphanage were found to have contracted HIV at a ghetto, Yordanka Fandakova vowed all-out inspections at all sites inhabited by Roma located on municipal or private property.

She explained that officials of the Sofia Municipality, the Health Ministry, the Education Ministry, the Social Services and NGOs would inspect all ghettos on the territory of Sofia.

Fandakova said that there were ghettos in seven residential districts in Sofia, the situation being worst in Vazrazhdane, Lyulin and Ovcha Kupel.

The BHC Chair cautions that any step taken by the Sofia Mayor to resolve the problem must be in line with the decision of the Strasbourg Court from April 2012 to avoid a lawsuit against the state.