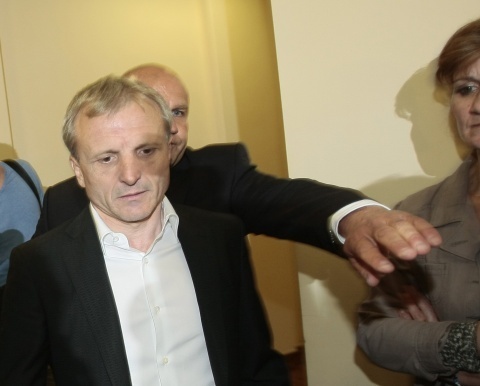 In Bulgaria, Grisha Ganchev faces charges of running an organized crime group specialized in tax fraud and with issuing a murder threat. Photo by BGNES

Several Bulgarian "businessmen," including oligarch and football club owner, Grisha Ganchev, have been part of a huge tax fraud scam in Romania.

The news was reported by the online edition of Romania Libera daily and cited by the Bulgarian news agency BTA.

The organized crime ring has been busted by Romanian law enforcement, saying the group acted not only in Bulgaria and Romania, but also in several other EU Member States.

The Court in Bucharest issued early Thursday morning the first arrest warrants in the case. According to the prosecutors from the Directorate for Investigating Organized and Terrorism Crime, DIICOT, which busted the gang, the tax fraud is connected to food items and construction materials.

The Romanian publication notes that the group, based in the city of Giurgiu, is linked to a number of Bulgarian businessmen, including Ganchev.

The bust happened on Tuesday with police raiding 256 locations in Bucharest and in other cities. The prosecutors have requested the detention of about 40 individuals. The probe has found that the crime group has inflicted damages to the State treasury in the amount of EUR 40 M a year for the 2010 – 2012 period.

The paper informs that crime boss Octavian Grecu AKA Butoane, Sorin Gazdac, son-in-law of Senator Cezar Magureanu, and one Lebanese citizen will be held behind bars for 29 days. Magureanu has been summoned for questioning and is expected to appear before DIICOT later Thursday

Grisha Ganchev is the owner of the Litex FC and the Litex company, based in the northern Bulgarian city of Lovech.

As of the end of 2011, Ganchev's joint venture with the Chinese company Great Wall Motors, Litex Motors, started the production of Chinese cars for the EU market in the Litex Motors factory near Bulgaria's Lovech, in the village of Bahovitsa.

In May 2012, Grisha Ganchev was arrested and charged with running an organized crime group specialized in tax fraud and with issuing a murder threat.

The businessman was subsequently released on a bail of BGN 500 000.

Ganchev is believed to be the mastermind of a six-strong group that was busted on May 11 after a joint operation of the Chief Directorate for Combating Organized Crime (GDBOP) and the National Revenue Agency (NRA).

In June, the Specialized Criminal Court released Danail Ganchev and Milko Dimitrov on a bail of BGN 100 000 each.

According to the magistrates' ruling, there is no evidence indicating that the two pose a real threat to society or that the two are likely to go into hiding.

The Specialized Criminal Court further imposed bails amounting to a total of BGN 20 000 for the two other defendants, Ivaylo Talev and Kamelia Mircheva.

The decision is not final and can be protested before the Specialized Appellate Court.