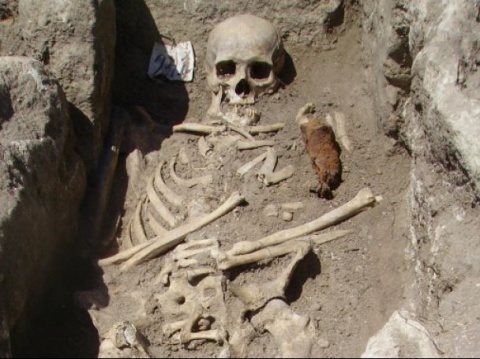 The National Geographic Facebook article about the medieval vampire skeleton, which was recently discovered in Bulgaria's Black Sea town of Sozopol has turned into the most shared link of news in the last four months.

The information about the discovery of the skeleton, which was brought to the National History Museum in the capital Sofia, has been shared over 4 000 times and there are over 300 comments.

The Bulgarian vampire is ahead of other sensational news such as the newly discovered Maya Temple in the Guatemalan tropical forest, the LZ1 asteroid getting dangerously close to the Earth on June 15th, or film-maker's James Cameron record dive to the bottom of the Mariana Trench, released on March 25th.

The news was reported by the Bulgarian 24 Chassa (24 Hours) daily, writing that the comments reveal very strong interest and curiosity about all details surrounding the "vampire" discovery.

One American Facebook user had written that this might be a skeleton of a Bulgarian politician since they are all known to be bloodsuckers.

Over 100 buried people whose corpses were stabbed to prevent them from becoming vampires have been discovered across Bulgaria over the years, according to Dimitrov. More details on Dimitrov's account READ HERE