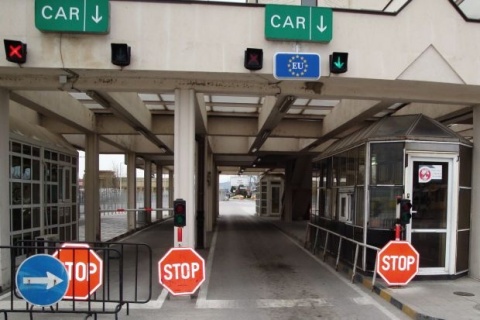 The Kulata-Promachonas border crossing between Bulgaria and Greece. Photo by Darik-Blagoevgrad

Traffic across the Bulgaria-Greece border has not been affected by the introduction of passport control after the July 18 terrorist attack in Bulgaria's Burgas, the Bulgarian Interior said on Wednesday.

The July 18 terrorist attack in Bulgaria's Burgas, also known as the Burgas Bus Bombing, killed 5 Israeli tourists and a Bulgarian bus driver at the Sarafovo Airport near Burgas. The attack led the Bulgarian authorities to reintroduce temporarily passport control at the EU borders of the country.

Traffic at the five Bulgarian-Greek border crossing points - Kulata-Promachonas, Ilinden-Exochi, Svilengrad-Ormenio, Zlatograd-Thermes, and Ivaylovgrad-Kyprinos - remains intensive, and has not been delayed by passport control, according to the Bulgarian Interior Ministry.

The Bulgarian Interior points out that about 17 000 cars on average cross the Bulgarian-Greek border every 24 hours, with 80% of the traffic going through the Kulata-Promachonas crossing.