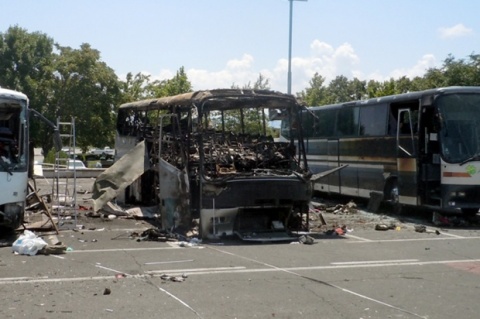 Photo by the Bulgarian Interior Ministry

Bulgarian bus driver Viktor Andonov may have saved dozens of lives in the immediate aftermath of Wednesday's terror attack in the Black Sea city of Burgas.

Andonov was standing some ten meters away from three buses that were about to transport Israeli tourists.

As the bomb went off, he reacted swiftly and moved his bus away from the vicinity of the one that exploded, the Bulgarian National Television says.

Experts say that the driver's immediate reaction prevented his bus from catching fire.

Andonov's bus was loaded with some 50 Israeli tourists.

The man is still in shock after the harrowing experience, local media say. He mourns the death of his colleague, Mustafa Kyosev, who was killed in the bomb attack.

Five Israeli tourists died in Wednesday's blast. The bomber is yet to be identified.