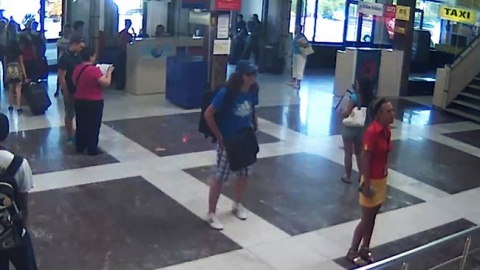 Bulgarian police is to be alerted to the possibility of a third suspect in a bomb attack that killed five Israeli tourists in Burgas, a local daily reported.

Investigators have determined that the bomb was detonated by a man caught on airport security videos about an hour before Wednesday's attack at Burgas International Airport. But sources told Standard daily that he had help by two other men, who were also at the airport during the terror attack.

The first accomplice is believed to have served as a back-up for the suicide bomber and was ready to replace him if the plot goes wrong.

The second accomplice was assigned to shoot dead the other two if they get arrested by the police or get scared and give up, according to the report.

Five Israeli tourists and the Bulgarian bus driver died in the blast, as well as the bomber. More than 30 other Israelis were injured, some seriously.

Israel has said it suspects Iran or an Islamist militant group such as Hezbollah is behind the attack, a claim that has added to tension between Israel and Tehran. Iran, which has condemned the attack, has rejected Israel's claims.

The man who carried out the suicide bombing was carrying what the Interior Ministry has said was a fake Michigan driver's license.

Bulgarian investigators are still trying to identify him.