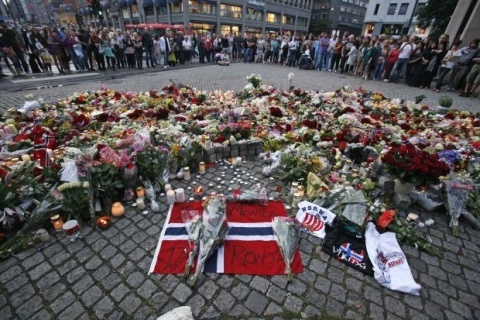 A file photo, dated July 24, 2011, shows the square outside the Oslo Cathedral covered in candles and flowers, placed in remembrance of the victims of the terrorist attack that shook Norway and the world. Photo by EPA/BGNES

Norway is preparing to commemorate one year since 77 people were killed and 242 hurt in gun and bomb attacks in Oslo and on the island of Utoeya.

Church services, a concert and other events are being held around Norway.

Anders Behring Breivik, who has admitted carrying out the two attacks, remains on trial. In court he has tried to justify the attacks by claiming he wanted to stop Muslims from taking over Norway. Most of the dead were young activists with the Labour Party who had been staying on Utoeya as part of a summer camp.

Thousands of people are expected to gather in Oslo for a day of events, including a memorial service at the city's cathedral.

Prime Minister Jens Stoltenberg will lay a wreath at the site of the Oslo bombing at 09:30 (07:30 GMT) and then travel to Utoeya to give a speech to Labour Party youth, before laying a wreath

In the evening there will be a national memorial concert with mainly Norwegian musicians.

Many of the buildings that were damaged in the bomb attack have not yet been fully repaired.

The prime minister's office and the ministry of health buildings are still covered in plastic.

The attacks, regarded as the worst act of violence in Norway since World War II, sparked a national debate about the nature of tolerance and democracy in the country.