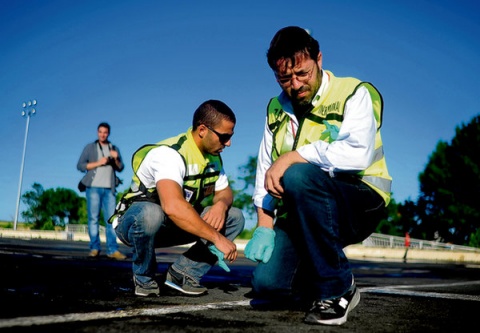 Members of Zaka, a private Israeli search and rescue organisation, look over the ground near the bomb site in Burgas yesterday.Photograph: New York Times

The suicide bomber responsible for the deadly attack on Israeli vacationers in Bulgaria was a member of a Hezbollah cell that was operating in Bulgaria, American officials told the New York Times.

American intelligence assessment was that the bomber, who struck Wednesday, killing five Israelis, had been "acting under broad guidance" to hit Israeli targets when opportunities presented themselves, and that the guidance had been given to Hezbollah, a Lebanese militant group, by Iran, its primary sponsor.

Two other American officials confirmed that Hezbollah was behind the bombing, but declined to provide additional details.

The attacks, the official said, were in retaliation for the assassinations of Iranian nuclear scientists, for which Iran has blamed Israeli agents — an accusation that Israel has neither confirmed nor denied.

"This was tit for tat," said the American official, who spoke on condition of anonymity because the investigation was still under way.

The bombing comes amid heightened tensions over Iran's nuclear program, which Tehran says is for peaceful purposes but Israel and the West say is a cover for developing weapons, the New York Times comments.

The United States and Europe imposed sanctions this month aimed at crippling Iran's vital oil industry, while Iran has sworn to exact revenge for the assassinations, as well as for cyberattacks on its nuclear industry.