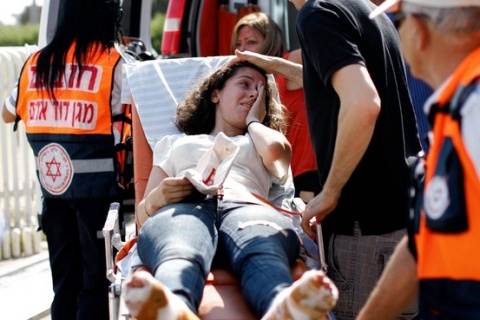 An Israeli wounded during the attack arrived at a hospital in Beersheba, Israel, on Thursday. Bulgaria flew dozens of Israeli tourists back home. Photo by WSJ

The attack on Wednesday on an Israeli tour group in the Bulgarian Black Sea resort of Burgas, which has claimed at least eight lives and injured 33, has profoundly shocked Bulgarians.

It is the first time in the modern era that such a terrorist atrocity has taken place on Bulgarian soil and it is one that has left the country struggling with a distinct identity problem.

Although the attack seemingly came out of the blue, there were clear indications that Bulgaria could be a target for such a strike. Indeed some commentators have been warning for many years of the vulnerability of the Black Sea coast to such attacks from either violent jihadists or state- sponsored terror groups.

There were a number of reasons for this.

First, there is the simple fact that Israeli citizens have long pursued a love affair with the Bulgarian Black Sea resorts. Burgas is just a two-hour flight from Tel Aviv and easily within reach of Israeli travellers.

The Black Sea coast has seen rapid development of the tourist infrastructure over the last decade. It is blessed with wonderful stretches of sandy beach, good food, a reliably warm climate and an increasingly sophisticated and modern range of shopping options, all of which appeal to tourists.

Despite the fact that the price level has increased considerably in recent years, Bulgaria still represents a notably cheap destination for tourists.

In the Israeli case, these positive features of the Bulgarian tourist environment are amplified by an important historical connection.

The close links between Bulgaria and Israel date from the second World War, during which virtually the entire Jewish population of Bulgaria was saved from annihilation by the Nazis.

The important legacy of this episode is that, in the Israeli popular mind, Bulgaria is viewed as the friendliest of European states and the one with which Israeli citizens feel most affinity. Thus the propensity of large numbers of Israelis to holiday in Bulgaria made the Balkan country a target for a variety of terrorist groups.

Bulgaria's vulnerability to attack also stems from its membership since 2004 of the North Atlantic Treaty Organisation and its close foreign policy relationship with the United States. Bulgarian troops served in Iraq after the US- led invasion in 2003 and have also been in Afghanistan since 2001 (600 Bulgarian troops are currently stationed in Kandahar).

In 2006, Bulgaria signed a defence co-operation agreement with the US which provided for the presence of up to 2,500 US troops in the country and the use of air bases at Bezmer, Graf Ignatievo and Novo Selo.

Crucially, the agreement also allows the US to use the bases "for missions in third country without a specific authorisation from Bulgarian authorities".

These bases are known as "forward operating sites" and provide the American military with an efficient means of projecting power in the Black Sea region and the Middle East.

This has become even more significant as Turkey has asserted a more muscular foreign policy of late, independent of its Nato commitments and traditional close ties to both the US and Israel.

Put simply then, the security calculus for Bulgaria has meant balancing the perceived benefits of being inside the Nato club with the risk attached to being so closely identified as an ally of the US and Israel. It now seems apparent that its close affiliation with the latter marked Bulgaria out as a target for attack by enemies of those states.

In many ways, this is an even more terrifying spectre for Bulgarian citizens.

For some time there has been significant chatter about the activities of radical Salafist Saudis and other foreign militants, who have been trying to radicalise some parts of the Bulgarian Muslim communities, which represent about 12 per cent of the population. Those communities are extremely diverse and do not constitute anything like a monolithic group.

In addition, Bulgaria's geographic proximity to Turkey and the wider Middle East make it difficult to track the movements of militants who blend in easily within Bulgaria's larger cities and towns.

If the attack has resurrected a familiar set of issues regarding Israel's relations with neighbouring countries in the Middle East, it has prompted enormous soul-searching in Bulgaria.