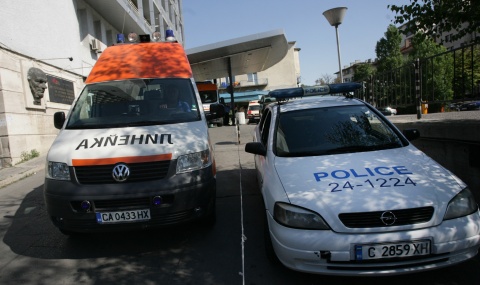 A Bulgarian ambulance and police car wait in front of Pirogov Hospital in capital Sofia where two of the critically injured Israelis were treated. Photo by BGNES

Media reports claiming that the suicide bomber who attacked a bus full of Israeli tourists in Bulgaria is Swedish ex Guantanamo detainee Mehdi Ghezali are false, stated the Bulgarian Ministry of Interior.

"Information circulated by media and elsewhere that the man who performed a suicide attack in Burgas is Mehdi Ghezali is not true," said the Ministry in a statement.

Earlier The Atlantic Wire had reported that Swedish officials had also refuted the allegations.

Bulgarian news site News.bg was among the first to publish the report, quoting its own forum users and refering to Ghezali's profile in the site CagePrisoners.com and the similarity they found in CCTV footage released earlier by the Bulgarian Ministry of Interior.

Born in Stockholm in 1979, Swedish national Mehdi Ghezali is of mixed Algerian and Finnish descent.

He was detained in US detention camp of Guantanamo between 2002 and 2004, with no formal charges levied against him before his release.

Prior to his detention, Ghezali studied at Muslim religious schools in the UK, and after that traveled to Saudi Arabia, Afghanistan and Pakistan, where he was detained.

Just before the release of the refutation, Bulgarian Minister of Interior Tsvetan Tsvetanov stated that the "ring around the perpetrator is tightening up," but refused to reveal any details before the end of investigations.