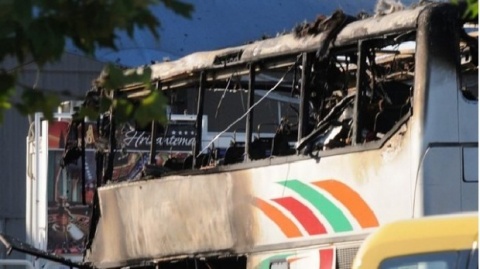 The bus skeleton which remained after the deadly July 18 blast was removed from the parking lot of the Burgas Airport on Thursday. Photo by BGNES

The bus, which exploded Wednesday while carrying Israeli tourists to the Burgas Airport, was removed from the airport's parking lot on Thursday afternoon.

The explosion only left a blackened skeleton of a bus, with the roof and the sides blasted off.

The photos lead to the conclusion that the bomb went off in the luggage compartment, because this part has been damaged worst.

According to Bulgarian Interior Minister Tsvetan Tsvetanov, however, the suicide bomber was standing at the bus' door at the time of the explosion.

The July 18 terror attack took seven victims, including five Israeli tourists, the Bulgarian driver of the bus and the suicide bomber, and left over 23 injured.

Nobody has so far claimed responsibility for the bombing.