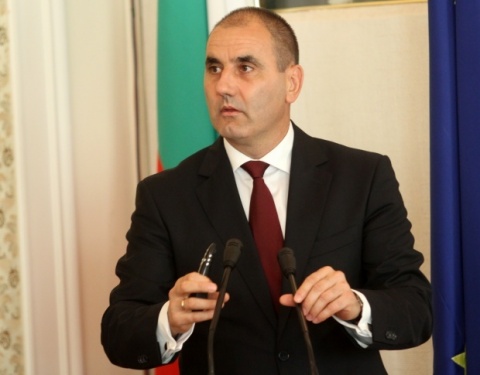 Deputy Prime Minister and Interior Minister, Tsvetan Tsvetanov, confirmed that the terrorist attack in Bulgaria's Black Sea city of Burgas is most likely the works of a suicide bomber. Photo by BGNES

The secret and special services in Bulgaria have not received any early warning that a terrorist act was planned in the country.

The statement was made Thursday by Deputy Prime Minister and Interior Minister, Tsvetan Tsvetanov, in connection with the terrorist attack at the airport of Bulgaria's Black Sea city of Burgas, where a bus carrying Israeli tourists exploded Wednesday afternoon.

"The information we received in January about a possible attack on Israeli tourists in our winter resorts has nothing to do with what happened in Burgas. Our partnership is outstanding and no partner service has alerted us on any possible act," said Tsvetanov.

Bulgarian media report that the US CIA and the Israeli Mossad are investigating the attack.

The Defense Minister of Israel, Ehud Barak, in a phone call to his US counterpart, Leon Panetta, has discussed the option of a joint CIA-Mossad probe.

Tsvetanov further confirmed the earlier announcement of Prime Minister, Boyko Borisov, that the terrorist attack is most likely the works of a suicide bomber.

The Minister described the alleged perpetrator as an individual, who looked like any other tourist, walking around the airport. He has been dressed in shorts and was carrying a backpack.

Tsvetanov also backed the information that the man had a fake driver's license from the US state of Michigan.

The Burgas airport is closed; the flights are diverted to the airport of the other Black Sea city of Varna.