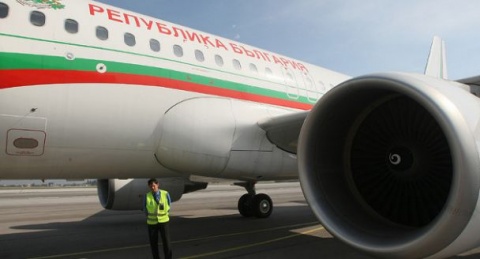 Bulgaria's government Airbus will transport Israeli tourists back to their homeland. File photo

Bulgarian Prime Minister, Boyko Borisov, has ordered the use of the government Airbus to transport Israeli tourists back to their homeland.

A bus carrying Israeli tourists exploded Wednesday afternoon at the airport of the Bulgarian resort city of Burgas.

According to various reports anywhere between 30 and 70 Israeli tourists remain at the airport. Food, drinks and blankets have been provided for them overnight. They will be brought home later Wednesday on the Bulgarian government aircraft.

The Bulgarian Standard daily cites the Israeli Red Cross reporting that 32 Israelis will be flown to their country from Burgas.

Meanwhile, it was reported early Thursday that two more people died from their injuries in the hospital overnight, bringing the death toll to 8. The number of wounded is 37. They were admitted to hospitals in Burgas. The three most critical were transported overnight by a government military plane to Sofia.

One Bulgarian citizen is among the victims. He has been identified as M.K., 36, the driver of the blasted bus, which was supposed to carry a group of Israeli tourists to the Sunny Beach resort.

The Burgas airport is closed; the flights are diverted to the airport of the other Black Sea city of Varna.

Prime Minister, Boyko Borisov, announced that the terrorist attack is most likely the works of a suicide bomber. The information was confirmed by his Deputy, Interior Minister, Tsvetan Tsvetanov.