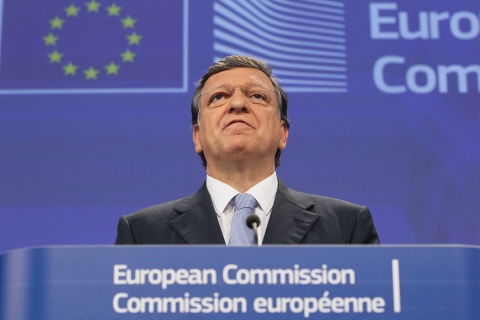 EC President Jose Manuel Barroso reacts during a press statement on recent developments in Romania and Bulgaria, at the EC headquarters in Brussels, Belgium, 18 July 2012. Photo by BGNES

The European Commission has sharply criticised Romania for failing to root out corruption and political influence in its state institutions.

The Romanian government's pressure on the judiciary is putting reforms at risk, the EU's executive arm says.

The two ex-communist neighbours joined the EU in 2007 and Brussels has put them under special surveillance. They are being urged to meet EU standards.

The Commission's opinion polls in both countries show a strong majority backing the EU drive to improve their state institutions.

The Commission report on Romania voices concerns about the rule of law, pointing to the power struggle between Prime Minister Victor Ponta and President Traian Basescu, whom he is trying to oust.

"Political challenges to judicial decisions, the undermining of the constitutional court, the overturning of established procedures and the removal of key checks and balances have called into question the government's commitment to respect the rule of law," the report says.

"The Commission is in particular extremely concerned by the indications of manipulations and pressure which affect institutions, members of the judiciary, and eventually have a serious impact on society as a whole."

Mr Ponta has pledged to respect the authority of the constitutional court, including its rules for the holding of a 29 July referendum on President Basescu's tenure. Romanian voters will be asked if they want Mr Basescu to be impeached.

Mr Basescu has been suspended since Mr Ponta, who heads a leftist government, accused him of blocking government policies. Mr Basescu's poll ratings have slumped since he backed tough austerity conditions set by international lenders.

The Commission monitoring team will report on Romania again before the end of this year.

Implementation of anti-corruption laws has "just started in some areas", the Commission complains. "The process is not yet sustainable and irreversible," it adds.

Romania now has a National Integrity Agency (ANI) to spot cases of political interference in public bodies and unwarranted wealth among officials, but its powers have been undermined, the report says.

On Bulgaria, the Commission calls for more judicial integrity, saying judicial appointments, appraisals and promotions need to be "transparent and objective".

"The fight against high-level corruption and organised crime still has to show convincing results," it says in its report.

The next Commission report on Bulgaria's progress will be at the end of next year.

Bulgaria has made "an important investment in the structures to fight organised crime, leading to the creation of specialised bodies at the level of the judiciary and police, as well as major steps to improve the legal framework for asset forfeiture", the Commission says.

But it urges Bulgaria to go further, saying there have been too many delays and inconsistencies.

Croatia will be the next country to join the EU, in mid-2013, and it is not having the special monitoring applied to Bulgaria and Romania.