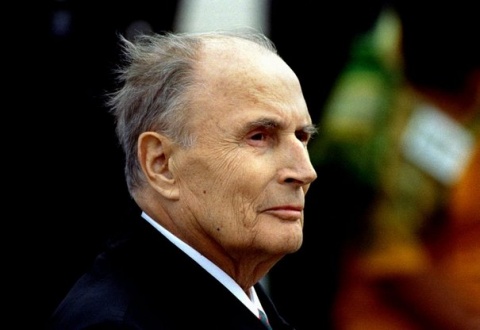 Francois Mitterrand, President of France between May 21 1981 and May 17 1995, arrived on a historic trip to Sofia and Plovdiv. This was the first visit of a French Head of State to Bulgaria. It is remembered with the famed breakfast with 12 Bulgarian intellectuals at the residence of the French Ambassador in Sofia, with the absolutely uncommon until then free talk with students at the Sofia "St Kliment Ohridski" University, with the visit at the Bulgarian Academy of Sciences, BAS, and the honor ceremony in Plovdiv for the great French poet Lamartine, who wrote in celebration of Bulgaria's independence.

Mitterrand actually arrived on an official State visit at a moment when the regime of Communist dictator, Todor Zhivkov, was in a growing-stronger international isolation over the so-called Revival Process forcefully changing the names of Bulgarian Muslims to Christian ones and in cooling relations with the USSR where Mikhail Gorbachev was on the path of perestroika, a path Zhivkov was refusing to follow. Bulgaria has also accumulated unbearable foreign debt and the economy was crumbling. The first signs of a dissident movement were emerging despite the full informational blackout and the pressure. The regime expected that the visit of the French Head of State would boast its tarnished image, but in reality exactly the opposite took place.

On the request of the French side, a meeting was organized with 12 Bulgarian intellectuals, considered at the time to be the leading dissidents in the country and the strongest opponents of Zhivkov's rule. The meeting, which became famous as the "Breakfast with Mitterrand" turned into an important step for their affirmation. It happened on January 20th at the residence of the French Ambassador in Sofia. The Bulgarian participants were poetry writer Blaga Dimitrova, Zhelyu Zhelev, philosopher, considered a long-time dissident and author on books about the totalitarian character of the regime, another philosopher – Nikolay Vasilev, poet and writer Radoy Ralin, whose satires criticizing the regime have already turned into folklore, journalists Stefan Prodev, Baruh Shamliev, and Koprinka Chervenkova, the physicist, Academician Alexey Sheludko, two other writers Yordan Radichkov and Ivaylo Petrov, movie director Angel Wagenstein, and painter Svetlin Rusev.

The majority of them were members of one of the leading "informal organizations" The Club for Support of Glasnost and Perestroika, whose confrontation with the regime at that point was growing stronger and united more and more of the country's intellectuals.

The Club, along with the Public Committee for Ecological Protection of Ruse, known also as the Committee for the Salvage of the City of Ruse, later renamed Ecoglasnost, are some of the first dissident organizations in Bulgaria. The Club for Support of Glasnost and Perestroika was founded on November 3, 1988 at the Sofia University under the initiative of Zhelyu Zhelev, who has been working on the project since 1986.

The main activity of the Club consisted of the adoption and dissemination of declarations strongly criticizing Zhivkov's rule. The Club's members found tribune on Western radio stations. Blaga Dimitrova and Marko Ganchev were the most active in this field, and their essays provoked strong reactions in the West. The Club had 6 sections dealing with different problems of society in Socialist Bulgaria such as the economy, human rights and freedoms, demographic problems, ecology, Bulgarian culture, interpretations of the country's history.

Bulgarian media at the time kept silent about the "Breakfast." Information on it was published only in Western press.

Mitterrand added to the surprises by insisting on visiting BAS where that same evening (January 20th) he met academicians, members, and professors  and expressed his admiration for the progress of Bulgarian science.

The other very remarkable event is the meeting with the college students. Similarly to his visit to Prague 6 weeks earlier, the French Head of State asserted his intentions to meet with the country's youth. The meeting was held at the large aula of the Sofia University. To the French press it was even more significant than the "Breakfast."

Years later, French journalist, Veronique Soule, who in 1989 was reporting on the visit for the newspaper Liberation, said in an interview that the dialogue with the students at the University remained her most vivid memory.

"It seemed that the secret services underestimated the situation and failed to handle it. The youth had overcome the fear and I realized at that moment that the days of Zhivkov's power were coming to an end. Mitterrand, himself, was surprised. One could feel the pleasure in his responses to the questions. After this meeting he told us (reporters) smiling: "something is boiling here, and it just remains for the lid to be lifted..." Today, Roland Duma, (then French Foreign Minister) confirmed that this had been the precise moment when the President realized Communism would be soon a thing from the past. Indeed, the veil of official lies was lifted and, contrary to what we, Westerners, were believing, it emerged that people's thinking has been freed; things had developed, and mostly that Bulgarian youth was ready for the challenges," says Soule in 2009 in an interview for Alfred (Freddie) Foscolo.

In January 1989, Veronique Soule wrote the following in Liberation:

"After the somewhat boring start of Mitterrand's visit with the "Breakfast," two hours later things heated up. The President ended at Sofia University, meeting with the college students. We expected, similarly to Bratislava, to find a handful of students and an army of stuff faithful to the regime in a freezing-cold hall. Actually, we saw nearly 1 000 students in the overheated aula. Without delay their questions came one after the other...

The peak was reached when Sociology student, Elena Mincheva, asked to learn the criteria to bestow the Legion of Honor Order, which was given to State and party leader, Comrade, Todor Zhivkov. Mitterrand found cover in the protocol and stressed that this had been a symbolic gesture, an expression of France's respect for Bulgaria as a State, for its history and culture.

Despite the serious obstruction on the part of Bulgarian authorities, something is happening in this country. Such exchange of phrases would have been unthinkable in Bulgaria only two years ago." (End quote.)

In contemporary Bulgaria, the intellectuals, who attended the meeting with Mitterrand in 1989, are often criticized for not have been true dissidents, but rather people close to the regime. Many note that true dissidents then were thrown behind bars, while those invited have indeed been "perstroichiks," individuals who had not wanted to topple Communism, but to rather make it a better system.

Veronique Soule described the meeting in Liberation in 1989 the following way:

"I was present at the famous "Breakfast at the French Embassy." To tell you frankly, this "Breakfast" disappointed me. We, journalists, as it happens often, waited for the event to come to an end to speak individually with the participants, but they quickly slipped out...

I understand them to some extend. It has not been easy in Bulgaria to criticize the regime as it was in Poland and Hungary where there was no problem. I even harbored some warm feelings for them, especially after, as a professional, I had to come across the cultural and intellectual level of Zhivkov. The interview he gave for Le Monde was a peak of stupidity, lies, and mostly cynics. We often exchange opinions with colleagues, and I can say that we all had the same analysis – if people from the Independent Union for Human Rights, the most radical and repressed, were not invited to attend, it was because Mitterrand had agreed to some compromise with the Bulgarian side. The diplomats present here should forgive me, but I will add that Mitterrand has been criticized that the French presence in the East came late. People there told us all the time; "you are dealing only with Russia; you forgot about us." In order to avoid fiasco, the diplomacy, apparently, had agreed to some compromise, but I believe, as then Ambassador in Sofia, Mr. de Lataillade confirmed, that he had firmly insisted to keep on the agenda the meetings with dissidents and college students. (End quote)

Also in January 1989, another journalist, Paul Gilbert, offered the following assessment of the "Breakfast" on the pages of Le Figaro:

"A breakfast with opponents of the official regime at the French Embassy has now become some sort of a ritual during visits of the President to "the other Europe. "Oborishte" street in Sofia ended up being crowded by uniform and plainclothes police. The arrival of the guests did not go unnoticed. It the reception room of the Embassy, Mitterrand, uptight as an icon, speaks briefly. "I am here to listen to you," and adds cautiously: "This might not happen again soon." Around him, the 12 intellectuals and artists make statements one after another, somewhat with nuances, almost Byzantine mysteriously. The precise accusations and the nagging humor of Czech dissidents he listened to in Prague are missing in their words. The Sofia guests, it seems are mainly worried about Bulgaria's image. They are rather waiting for the President to respond to their wishes and aspirations than to present their criticism of the regime. Are we indeed talking about true opposition? Rather about reformers. They did not come to complain, but to find support. Mitterrand, on his part, insisted on a dialogue, without interfering in the country's internal affairs and giving lessons." (End quote).

The assessment of the French journalists might be very to the point; these so-called dissidents were inexperienced, confused; most of them might have truly believed in the "Socialism with a Human Face" and most of them failed to find their real place in the process of establishing democracy in Bulgaria, but this meeting with Mitterrand was a crucial step in the right direction. France became the first Western democracy to acknowledge the Bulgarian opponents of the regime and to lead a dialogue with them and with Bulgarian youth.

On October 26 1989, activists of the Ecoglasnost movement gathered in the small park, known as the park Crystal in Sofia, named after the then popular Crystal pastry shop, to collect signatures for a citizens' petition to the General Assembly to halt the construction of the hydro-projects "Rila" and "Mesta." The regime reacted violently. 22 people were forcefully taken by the militia on buses and driven to the South Park, the location for which the then City Hall had issued a permit. Some were severely beaten.

On November 3 1989, Ecoglasnost organized a procession. According to eyewitness accounts nearly 4 000 attended to submit the petition with 12 000 signatures to the General Assembly. This was the very first protest rally against Zhivkov's regime. Only a week later Zhivkov was toppled.

"Mitterrand's visit gave courage to those who wanted to stand against the totalitarian regime," stated Zhelyu Zhelev, who later became the first democratically elected President of Bulgaria after the fall of Communism.

*The quotations from the French press are also taken from an article of Freddie Froscolo.

Alfred (Freddie) Froscolo was born in 1942 in Sofia and spent his live between France and Bulgaria. He was a political prisoner in Bulgaria between 1968 and 1971 and later escaped to France. After that he entered Bulgaria secretly on several occasions and helped the escapes of other people. He is one of the strongest critics of the 12 intellectuals, who were invited by Mitterrand in 1989.