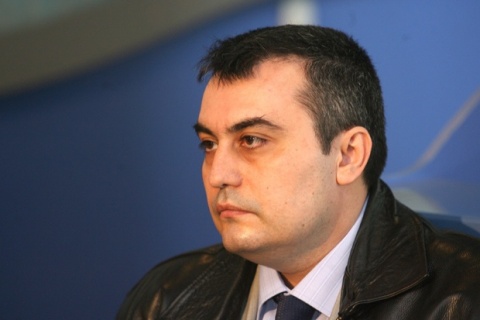 Sofia City Prosecutor, Nikolay Kokinov, says the arrest of a GERB MP over extortion charges coming on the same day as the official EC report on Bulgaria is pure coincidence. Photo by BGNES

The Prosecutor's Office followed and spied on GERB Member of the Parliament, Dimitar Avramov, for a week to make sure he will "fall in the trap."

The MP from the ruling, center-right Citizens for European Development of Bulgaria party, GERB was detained Tuesday during a special operation of the Main Directorate for Combatting Organized Crime, GDBOP, the State Agency for National Security, DANS, and the Sofia City Prosecutor's Office. He is charged with trading influence in asking and receiving BGN 50 000 to exert pressure on an employee from the Regional Directorate "Agriculture" in Montana to grant subsidies for farming lands. The owner of the lands is the person who alerted the authorities that he has been forced to pay the amount or transfer part of his business to the MP.

Kokinov confirmed in the interview that Avramov, 35, has asked an acquaintance to transfer to him part of his business, promising in exchange "actions he should not commit in his capacity of MP" and has received BGN 50 000 for trading influence.

The same Avramov was sentenced in 2011 to pay a fine of BGN 5 000 for lobbyism in passing legislation. According to the Supreme Administrative Court, VAS, he committed conflict of interest in proposing amendments to the Farming Lands Act.

Kokinov refused to say if the MP has committed conflict of interest in proposing amendments to legislation connected to the Committees whose member he was. The city Prosecutor further stated the arrest happening on the day of the of the official release of the European Commission monitoring report on Bulgaria' s judicial system and home affairs under the Cooperation and Verification Mechanism was a pure coincidence.

It is expected that Avramov will be stripped of his immunity later Wednesday after the Chief Prosecutor presents evidence in the case. He is kept behind bars for 24 hours.

Meanwhile, the Executive Committee of GERB decided unanimously to ask their MP to submit his resignation. He is also released from all party posts and expelled from GERB.

When asked if Avramov's position has been taken into account, the Member of the Executive Committee, Rumen Ivanov, replied: "It is clear that there is no way to hear his arguments since he is in jail. But the very same fact that he is under arrest means he is guilty of something."