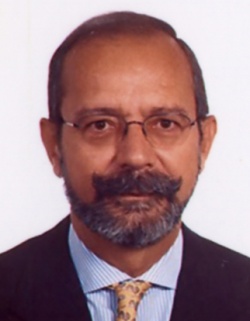 Exclusive interview of Novinite.com (Sofia News Agency) and Novinite.bg with His Excellency Jose Luis Tapia, Ambassador of Spain to Bulgaria.

H.E. Jos? Luis Tapia Vicente, has a degree in Economic Science, and a Diploma of International Studies of the Diplomatic School. He was born on August 25, 1948, in B?jar (Salamanca).

He began his diplomatic career in 1978, and has served in the Spanish diplomatic missions in New Delhi, Moscow, Brussels (at the EEC/EU), Montevideo, Quito, Tripoli, Havana. He has been a Plenipotentiary Minister since 29/09/2006.

How has the win of Euro 2012 been reflected in the Spanish society?

It has been met with great excitement, of course. I think it's an extremely positive event because of its added value. It is always nice to have news like this!

You have arrived recently. What are you initial impressions of Bulgaria?

I have two reasons to be extremely satisfied. The first time I was in Bulgaria was in the early 70s when the people were not allowed to talk openly to foreigners. Back then I saw a society that was suffering.

Now I see that everything is open – people are happy to talk to anyone. And I notice this special feeling towards Spaniards – this is extremely pleasant and makes things easier for me.

Now we must translate this into results, that is, the figures of the exchanges. Things are looking very promising from my point of view.

Is there a public scare in Spain in a time of really tough financial crisis?

I would not say there is a scare in Spain but there are worries. These are public worries. Before it was terrorism. Now we are talking about the economic situation as something that is affecting everyone.

Much of this situation is owing to the fact that the proper measures were not taken when they should have been taken. So the people know how to overcome this situation.

But the government has to take measures even if they are not politically welcome by everyone in order to make the economy more stable, flexible, and that will produce results.

With all the measures that had been taken in Spain from February of this year, the background principle had been austerity. Now we want to spend more on employment. Macroeconomic and budgetary stability has been the key for what Spain has been doing for the last four months.

Is there evidence that it's working?

Experts say we are now seeing the end of the tunnel, that we are seeing some light. For instance, how do you want the economy to be alive if there is no credit in the banking system.

This is why we asked for this injection of funds for recapitalizing the bank system. If there is no credit, the economy cannot function

In this context of huge unemployment, has immigration been an asset or a liability for Spain?

Since Spain, as mentioned above, has been a primary destination for Bulgarian emigrants – what are the current trends – are Bulgarians migrating back to their home country from Spain in large numbers? What is the position of the Spanish authorities – do you encourage them to come back? Does Spain still welcome immigrants (especially from within the EU)?

I don't have exact numbers but Bulgarian immigrants in Spain are not coming back to Bulgaria.

The Bulgarians are very well integrated in Spain; they are not only working but also living in Spain. Being in Spain, they are obtaining a fantastic asset – the Spanish language. This is an asset not only for them but also for Bulgaria.

For instance, there is a Spanish company now in Sofia called MonteBoyana that has built 69 flats here in Sofia's Boyana quarter. This company is getting Bulgarian workers from Spain who speak excellent Spanish, and are happy to be back in Bulgaria with these jobs.

Bulgaria's foreign minister has mentioned that Cyprus is very important for Bulgaria because a high percentage of the population in Cyprus is Bulgarian. In Spain, officially there are 180 000 Bulgarians.

The same goes for the Bulgarian Roma in Spain. There was recently a study of the Open Society Institute comparing the situation of the Roma in Bulgaria, Romania, Italy, and Spain.

In Spain, their integration is more successful so we have to learn from.

What is the best way for Bulgaria to attract more Spanish investors?

Let me give you an example. A company that would like to invest in green energy says, "We are not going to invest unless we find a very stable, permanent context". They need to be able to project their return on investment for 10 years. But suddenly there is a change in the legislation. So there must be a legal framework that needs to be predictable and stable.

It has to be a very stable system in order for people to know what to expect, how, and when; this is applicable to the judicial system, the legal system.

Bulgaria is getting there, there has been progress. We are also providing assistance; there are several Spanish judges and magistrates coming to Bulgaria to provide support. This stable legal framework is very important; this is the asset that you can't touch.

Are Bulgarian products competitive in Spain?

But in order to have greater trade, we have to promote it, and to promote the trade, the institutional support is very important. That is why in my work here I would like to get Spanish delegations coming to Bulgaria, and more Bulgarian delegations going to Spain.

I think we need to increase the promotional campaigns in order to make Bulgaria better known in Spain. Here once again, as I said – the knowledge of the Spanish language is very important. What is ever more, it is the key to trade with Latin America.

Adding to that, is Spain in favor of a tighter EU/euro zone core, as championed by Germany and France, from which some "outer" member states might fall out (Britain included)?

The basic principle of here is harmonization. In every economic integration area, harmonization is the main thing.

I will give you an example. In Bulgaria you may produce fantastic furniture but its market is in Germany. How long does it take to put this in a truck and take it from Sofia to Munich compared with how long it takes to ship it from Madrid to Munich?

The cost and time in putting it to the same market is different so we have to harmonize this. This harmonization principle is the basic one in every integration system.

In that respect Spain says, "Ok, there are differences between Germany and France and the periphery countries, we have to invest in order to harmonize the situation for everyone."

The idea in Spain is not just to have a Europe of different speeds, we have to harmonize everything.

For instance, Bulgaria's foreign minister was talking about cohesion funds. They are extremely important, vital for Bulgaria, the same way they were vital for Spain. The cohesion funds are beneficial not only for the beneficiaries but also for the rest of the European Union because the European Union is going to benefit as whole from the growth of Bulgaria, Romania, or Spain. The harmonization principle is the basic one.

You were Spain's Ambassador to Libya at the time of the so called Libyan HIV Trial in which 5 Bulgarian nurses and one Bulgarian doctor were accused of infecting kids in Benghazi with HIV. You were very involved with this case, which dragged on for 8 years, and ended with the nurses' release. What are the main lessons for the international community from this trial?

For example, Bulgaria's then Prime Minister Simeon Saxe-Coburg, then Foreign Minister Solomon Passy did a lot! As did Bulgaria's then Ambassador to Libya and the Counselor Rumen Petrov, who is now Bulgaria's Ambassador to Egypt. They did a lot to resolve the case – this has to be said! Whenever they met foreign officials, they asked them, "When you go to Libya, tell the Libyan authorities they are going to pay for that."

The Bulgarian nurses were the scapegoat because some high ranking Libyan officials were actually responsible for the import of contaminated blood. I had the honor and privilege of meeting with the Bulgarian nurses – and reported back to my capital, and to Brussels this fact.

The nurses did survive in those conditions, and I was very pleased to receive all of them here!

It was back in February 2000 that for the first time I had the privilege of meeting Counselor Rumen Petrov; he explained the situation to me, and I felt I had the obligation to do my part. The case was resolved successfully! But it took 8 years!

What are your ambitions and goals for your term as Spanish Ambassador in Bulgaria?

I like to name things by their names, and not beat about the bush. For me, the economy is the main thing. We can say the President of the Spanish Government has a very good personal relationship with the Prime Minister of Bulgaria but we have to translate this into results because those results will be to the benefit of the Bulgarian people and the Spanish people, and the rest of Europe.

If a Spanish company comes to Bulgaria, it can benefit from the entire regional market. The establishment of Spanish companies in Bulgaria is an absolute priority for me because that way from Bulgaria they will have a tool to go to Romania, Turkey, Greece, Serbia, Macedonia, Albania, because Bulgaria is in a strategically important place.

So for me this is important. It is wrong to think that trade only benefits the exporter. No, no, no. there are a number of large hi-tech companies in Spain – they are wiling to come to Bulgaria. What we need to do to get them to visit. We have the Bulgarian opportunities, and the Spanish companies. I am eager to establish these contacts. But we do need to have this stable legal framework I was talking about earlier.

The Embassy of Spain in Sofia is open to the people without any prejudices. We call things by their real names. We speak frankly. If we don't like something, we always say that.