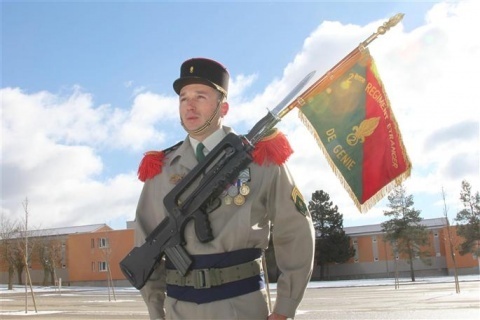 French foreign legionnaire, Chief Sergeant Svilen Simeonov, a Bulgarian, was among the 4 French soldiers killed in Afghanistan at the beginning of the year. Photo by the Embassy of France to Bulgaria

The Afghani serviceman, who killed four soldiers from the French military contingent, including Bulgarian Chief Sergeant, Svilen Simeonov, has been sentenced to death.

The shooter, who at the time was a 21-year-old, Second Lieutenant, Abdul Saboor, was tried by military Court in the prison Pul-e-Charkhi near Kabul. He has been found guilty of murdering the 4 and injuring another 15.

The date of the execution remains unknown.

The four soldiers from the French military contingent were killed in northern Afghanistan on January 20th 2012. Bulgarian Chief Sergeant, Svilen Simeonov, was among those killed. At the time, the Embassy of France in Sofia issued a statement of regret for the Bulgarian member of the Foreign Legion.

The French soldiers were killed after Saboor, a serviceman from the Afghan National Army, opened fire. Their bodies were transported to Paris, after being sent off from Kabul with military honors.

The killer confessed that he was motivated by the despicable video clip, distributed online, showing US soldiers urinating on the dead bodies of murdered Afghani servicemen.